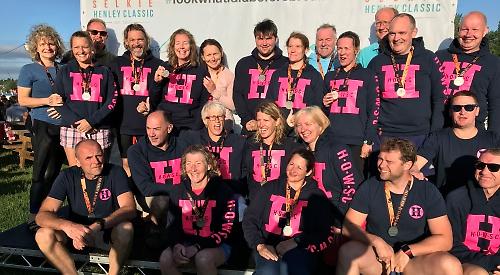 A SWIMMER completed her 10th Henley Classic on Sunday, the first woman to achieve the feat.

Sue Nadin, of Park Road, Henley, was one of 699 people who took part in the 15th annual event, which takes place on the Henley Royal Regatta course early in the morning.

Swimmers were led along the towpath by torchlight to the start line where a laser beam pointed towards the finish 2.1km away.

The first wave set off upstream at just after 4am as the sun began to rise.

The winner was Tom Brew, from Devon, who finished in 27 minutes and 40 seconds, beating last year’s best time by more than a minute.

The fastest woman was the defending champion Vicky Cunningham, from Reading, who swam the course in 29 minutes and 34 seconds. The winners will have their names engraved on two trophies, which are displayed in the River & Rowing Museum.

Ms Nadin, 57, said: “I was very proud of the achievement. It’s always a challenge getting up at 3am with the intention of throwing yourself in the river.

“Every year I think ‘do I really want to do this again?’ but now, having done it on 10 occasions, I still love it. It’s the setting, camaraderie, excitement, anticipation and apprehension. “It’s a brilliant way to start the day.”

She said: “The first time I completed the Classic I had no experience other than at the seaside. I didn’t possess a wet suit and I wasn’t used to swimming distances so it was pretty gruelling.

“In the second year I was more relaxed about the event and what it involved as I had done a lot more training. Following that I started to swim regularly with a group of people.”

Ms Nadin, who works at DHL Supply Chain, added: “I love open water swimming. I think it’s a great activity for people to get involved in. It’s invigorating but also it really allows you to benefit from the beautiful area that we live in.

“I listen to people coming from all over the country and some from even further afield to camp overnight to enjoy what we have.”

Ms Nadin plans to take part in the 14km Thames Marathon from Henley to Marlow on August 4.

In 2016 she completed the challenge and raised £2,000 for Rays of Sunshine, which grants wishes to seriously ill children. More than 20 members of the Henley Open Water Swimming Club also took part.

She finished in a time of 51 minutes, beating last year’s time of 53 minutes and her 2017 effort of one hour and 10 minutes.

Mrs Reineke, of Berkshire Road, Henley, said: “I love it. It was a bit of an early start but the atmosphere was lovely and I went with all my friends from the club. The water was lovely and warm. I’m quite pleased. I think I could have made a better start as I got stuck in the pack. Next year hopefully I’ll be sub 50 minutes.”

Tom Kean, who founded Henley Swim with Jeremy Laming, said: “It ran like clockwork and we were very pleased. The conditions were perfect — we couldn’t have asked for better.

“Jeremy and I talked to a lot of people during the course of the event and actually, probably more than any other year, we heard nothing but praise and positive feedback.

“Some people are looking for a bucket list-type of event to do and they just love it. It’s midsummer in England and it’s the most amazing setting as the regatta is all set up and looking splendid.”

The next Henley Swim event will be the inaugural Henley Swim Festival on the regatta course next Sunday (July 14).

This will incorporate the Henley Mile swim, which has been running annually since 2011 and attracts swimmers of all ages and abilities.