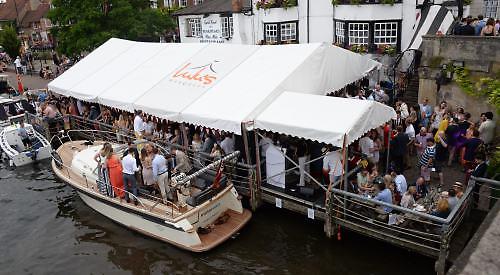 TRADERS in Henley say the royal regatta was good for business but still want more done to lure visitors into the town.

Tens of thousands of people came to the five-day event, which ended on Sunday, but many remained on the riverbank to watch the action and visit the bars and other outlets there rather than come into the town centre.

Laurence Morris, who runs Laurence Menswear in Duke Street, said: “I did feel that the number of visitors in the town was down. There didn’t seem to be the same buzz as usual.

“I think that was because, when people arrive on the train, they immediately turn right to go to the regatta. There were no signs encouraging people to come to the town centre. Usually we get a flood of people every half hour.”

He said that despite this, his shop was still busy and his sales of jackets, ties and chinos reflected this.

“I opened the shop at 8.30am and there were people coming through the doors straight away,” said Mr Lawrence. Lorraine Hillier, who runs the Hot Gossip coffee house in Friday Street, reported a mixed week.

She said: “We actually had a very good day on Saturday but it was very quiet on Sunday.

“In the week there were certainly a lot of people, but they were just going straight down to the river.”

Ms Hillier, a town councillor, added: “For the people getting off the train, there needs to be really good signs to tell visitors what is happening.

“Next year, they need to do something to encourage people to walk through the town centre.

“It is actually the best time of the year for shopping because you can usually get parked in the street as everybody wants long stay spaces.”

Nigel Rainbow, who has run the Three Horseshoes pub in Reading Road for 20 years, said: “It was definitely a success. We even fed some of the crews this year, including the US Navy team that won the King’s Cup. They loved all of the pasta and fresh salads.

“The problem we have is that the regatta site has got bigger and bigger and offers a lot of different facilities. We don’t charge extra for people to come in and we don’t put our prices up.

“When it is busy, you will make lots of money anyway. People object to being charged £10 or £20 just to walk through the doors and I agree.”

Lawrence Tian, owner of Berries Coffee in Hart Street, said his trade was up by about 30 per cent compared with a normal week.

He added: “This is not necessarily the event for coffee shops but we still did much better than we usually do.

“There could be better signage to get people into the town centre though. All the beautiful views are down by the river, so maybe we should have some sort of event that lures people in our direction.”

Joan Bland, who runs Asquiths Teddy Bear Shop in New Street, said: “We get a lot of people coming into the shop. It is always very busy.

“We sold a lot of teddy bears with Henley related jumpers. We sell a lot of collectors items. People come every year and buy something because it is traditional.”

However, the former town councillor felt that the signs on the approach roads warning motorists of delays in the build-up to the regatta did not help the town’s economy.

Bashir Islam, owner of Spice Merchant on Thames Side, had an outdoor bar area but it failed to attract enough custom.

He said: “My idea was to put this in so that people could see us and they would want to come in. It didn’t work as I had hoped and we lost a lot of money on it.”

Helen Barnett, town and community manager, said: “It was a mixed bag. A lot of people were here but not all were spending money.

“We ran a campaign to try to encourage local residents to come into the town.

“The regatta is so positive and helps to put Henley on the map.”