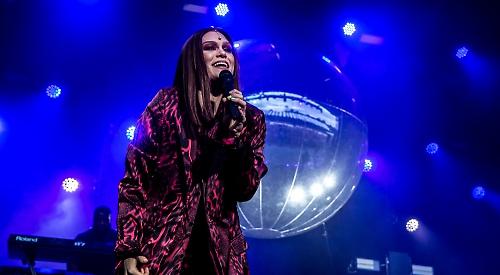 JESSIE J doesn’t do half measures. Every song she sings and every word she says is laced with emotion and purpose.

Her return to this year’s Henley Festival had been highly anticipated following a well-received set in 2015 — and she did not disappoint.

Emerging on to the stage in a vibrant pink and black suit, it was not long before she had the Henley regulars on side.

It had been almost exactly seven years to the day since I last saw Jessie J live and I did know what to expect. Happy memories of my visit to the Wireless Festival in 2012 with a group of school friends filled me with optimism and assurance, despite a lack of appreciation for her more current work.

While she may not be hitting the charts as often as she was when I was at school, Jessie commands a loyal following of heartbeats — the name she has adopted for her fans — and a career which most other artists can only dream of.

She has sold more than 20 million singles and three million albums worldwide. But she has struggled to maintain her popularity and when she relocated to Los Angeles in 2014 she said she didn’t feel her talents were appreciated in the UK.

There was a wide variety of hits and she opened the show with Masterpiece. This was followed by Dude and it was at this point that the crowd really started to get into the set.

She encouraged guests to get onto their feet, dance, jump and get closer to the stage — and even asked the stewards to be more relaxed.

During the middle of her set on the Floating Stage there was a three-song dedication to her close friend and bodyguard, who died in December 2018.

She told the crowd: “The last time I was here in Henley I was with my security guard, who was with me for five years.

“He was in my life every day and sadly we lost him last December.

“We have to celebrate people when they leave us. I know he’s here and I know he can see us.

“I have been all over the world, but there really isn’t a place like this.

“I want to make music that stands the test of time. Music has to make you feel something and has to have a message.”

It was this raw emotion, coupled with her vibrant stage presence, which made her the perfect fit for Henley. It did feel, at times, like more of a motivational therapy session than a headline performance, but these encouraging words were appreciated by the dozens of fans who clambered to get a spot in the front row.

This enthusiasm was shared in the grandstand and spectators did not waste any time in getting out from their seats and lining the aisles.

Audience participation played a key role in Jessie’s set and she often invited sections of the crowd to join in or even compete against each another. The audience united with their smartphones aloft when she performed Flashlight, which saw hundreds of happy people swaying to her talent.

She had earlier performed Nobody’s Perfect and encouraged younger members of the audience to remain grounded and follow their dreams.

This message was reinforced towards the end of the evening when she sang Who You Are either side of Bang Bang and Domino.

There was a lot of anticipation about the finale and relief when the opening lyrics to Price Tag started. Smartphones were in the air once again as fans recorded Jessie’s most iconic track.

Her influence in America has seen her contribute lyrics to Miley Cyrus’ Party in the USA. However, she is a regular face on the small screen with The Voice Kids and she has also achieved popularity in China, winning the talent show Singer 2018.

Having proved her versatility and positive influence on younger generations, Jessie J’s set was always going to be a success at Henley. It’s who she is.