All smiles at children’s try-athlon 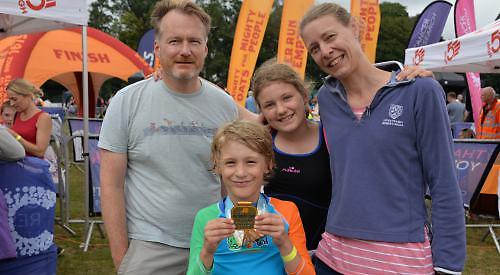 HUNDREDS of children took part in a triathlon in Henley on Saturday, writes David White.

The 750 youngsters, aged five to 16, tackled various distances in the pool at Henley leisure centre before cycling around the surrounding area and returning to run around the Gillotts School field.

Many taking part attend primary schools in Henley and were supported by their parents.

All the children received a medal when they crossed the finish line.

Zoe Steenson, marketing manager for UK Triathlon, which ran the event, said: “It was excellent and I couldn’t believe how many five-, six- and seven-year-olds there were. There were lots of smiling faces.

“For us, it’s key to encourage kids to be active, particularly in this day and age with electronics and all the rest of it. Swimming, cycling and running are generally part of kids’ everyday life.

“The distances we offer enable the competitive and the non-competitive child to enjoy it.” On Sunday, there was an adult triathlon in which 350 people took part. The swim distances ranged from 200m to 400m, the cycle ride from 13km to 26km and the run from 2.5km to 5km.

There was also a “pink wave” — a ladies-only start in aid of Cancer Research with £10 from every entry fee going to the charity. Mrs Steenson said: “I think it was the best Henley event we have done. Lots of people were stopping and saying, ‘Thank you, it was really well organised and we’ll be back next year’.”

Henley Lions Club manned the car park on both days and the proceeds go to charities.