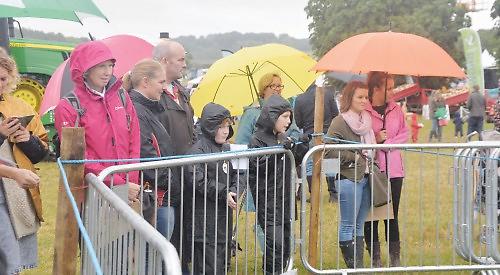 AFTER almost 130 years of promoting agriculture, farming and the countryside, the Henley Show has changed its name.

It is now known as the Henley Farm and Country Show in a rebrand designed to make more people aware of its remit and to attract new visitors in addition to the thousands who already attend each year.

This year’s show will be held at the Greenlands Farm showground, off Marlow Road, on Saturday, September 14.

The Henley & District Agricultural Association, which organises the show, hopes the new name will boost numbers at the gate as well as its finances, securing the future of the event for years to come.

The show’s roots can be traced back to 1891 when landowner Richard Ovey, of Badgemore, founded the association.

He decided to hold a ploughing match at Hernes, his estate, in the autumn of the following year.

As well as ploughing classes, there were classes for rick building, thatching, shepherding, butter, poultry, eggs and collections of vegetables at the event.

In 1898 Mr Ovey held a public meeting to discuss broadening the association’s events and in September the next year the first expanded Henley Show was held at Hernes.

Since then the show has been held annually on the second Saturday of September except during the two world wars and in 1952 when it was cancelled due to an outbreak of foot and mouth disease.

Although its format has been tweaked since 1892, the show’s objective of promoting and educating visitors about farming and the countryside remains the same.

However, with growing competition from countless other events, the association felt it needed to do more to maintain the show’s popularity.

Jo Taylor, association and show manager, came up with the idea of a rebrand in January.

She said: “I have a nine-year-old grandson who’s involved with various activities. When I am picking him up, I talk to people about the show and 50 per cent of them say, ‘What is that? Is it the regatta? Is that the festival or a horse show?’ They have no idea.

“It occurred to me it might be a good idea to rebrand the event to make it clear to people what we actually do on the day.”

Association chairman Andrew Ingram experienced the same reaction while handing out leaflets for the show at an open farm Sunday event at Crowmarsh Battle Farms in June.

He recalled: “At least half of the people I spoke to didn’t actually know what Henley Show was about.

“They were nine miles down the road and didn’t know what we did.

“A lot of the younger generation who live in urban areas have no idea what a county or country show is all about.

“We explained it was an agricultural show and promoting country activities.”

Jennie Spooner, the association’s agricultural chairman, added: “This experience, backed up by what Jo had described, meant that the new name was very necessary.

“There are so many new people and young families moving to the area and we’re trying to appeal to them. The public have a lot of choice now as to what they do at the weekend.

“By hopefully attracting more people we will sell more tickets in advance.

“It isn’t waiting until we have gone to the wall and saying ‘we have got to resurrect this’ because by then it will be too late.”

Mrs Taylor took the idea of renaming the show to the association’s six directors, who were in favour of the change. The committee members approved the change in a vote in June.

Mr Ingram, who runs Christmas tree business the Tree Barn at Christmas Common, said: “It’s more descriptive of what we do — it does exactly what it says on the tin.

“A lot of people who have never attended the show before will know more about what it involves.

“We have got to publicise ourselves and the more we tell the public about what we do, the more likely we are to succeed. It’s a competitive world.

“I think it’s a challenge to be relished. We’re a charity and our charitable status is to promote and improve agriculture.

“That’s the founding principle and in order to achieve that we have got to sell it as best we can.”

Any surplus that the association makes goes to agricultural-related charities.

In March show organisers announced they had made a loss on the event and the association’s other events, a ploughing match and sheepdog trial, during the year for the third year running.

However, the association is on solid financial footing with about £90,000 in its reserves.

Mr Ingram said: “We’re a charity and we can’t operate at a loss and the more people we get into the show, the more we’ll be able to fulfil our charitable remit and distribute funds.”

As well as unpredictable weather to contend with, the show organisers are always mindful of the potentially devastating effect that another outbreak of foot and mouth disease could have.

Mrs Spooner, who has a small Aberdeen Angus herd at Kingwood, said that in the cattle classes the animals had to be tested for tuberculosis before they could be shown.

She explained: “We have to have an ‘animal gathering licence’ from the Department for Environment, Food and Rural Affairs.

“We have lots of forms to fill in and we have to be aware of ever increasing health and safety issues.

“We want to make everything accessible to people so they can see everything but have to take these measures in order to meet health and safety requirements.

“Foot and mouth would stop the agricultural section of the show completely.”

The show’s basic format has remained unchanged over the years but there have been new additions.

In the mid-Nineties a poultry tent was added and this has increased in popularity year on year.

Sheep and fleece classes were introduced five years ago and the number of entries has steadily increased, while a horticultural display tent was introduced six years ago.

Cattle numbers at the show have also increased when other shows have experienced a decrease. There were about 25 per cent more animals at last year’s show compared with 2017. There are already five different breeds entered for this year’s show next month.

This year there will be the livestock and produce classes including cattle, sheep and poultry, fruit and vegetables and flower arranging.

New additions include a fun fair and a forestry demonstration.

The horse show will do away with classes for affiliated societies in order to give owners in the local area more opportunities.

The popular showjumping classes will be held again and heavy horses will make a return. The organisers are also hoping to have a ridden heavy horse class.

Richard Savory will return with his popular sheep show and the Aldabra giant tortoises from the Seychelles will also be back.

Mr Ingram said he was “excited” about the rebrand and the prospects for this year’s show.

He said: “My one desire is to make the show a success and everything coalescing to make that happen is to be encouraged. This is one more arrow in our quiver to make it more popular — make people aware of it and attend.”

Mrs Taylor, who will mark her 10th show with the association this year, said: “I feel very attached to this show. I believe what we do, we do very well.

“I can’t wait to look at the figures the week after this year’s show — I’m just hoping it works.

“It’s very important that more people come because what we do is so special. It’s not just about the money, it’s about what we can give back and I think this rebrand makes it clear what we can actually give.”

For tickets, or to become a member of the association, visit
www.thehenleyshow.co.uk