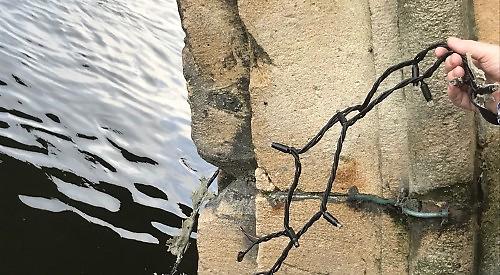 PLANS have been submitted to light Henley Bridge permanently.

Entrepreneur and artist Clive Hemsley has applied to Wokingham Borough Council to install LED lights on the Grade I listed structure.

They would replace LED fairy lights he installed on the 18th century crossing without permission in March last year and would be a permanent, higher-quality arrangement.

Mr Hemsley, of Hart Street, Henley, said: “We have applied for proper rope LED lights as on all the London bridges.

“They will be attached by drilling into the mortar. They won’t be glued or taped as with the fairy lights.

“It’s going to be very tastfully done, let’s put it that way. We want them done properly — I’m not economising.”

The application is the first of many Mr Hemsley must submit to carry out the work, which he hopes will be completed in time for Christmas.

He has also been told a full structural survey of the bridge will have to be undertaken and he must obtain listed building consent.

He said: “This is the start of probably a dozen different applications. We have go to South Oxfordshire District Council, Oxfordshire County Council and Historic England.

“It’s too early to start celebrating but we’ll get there. There are certain things that just have to be done.

“We have a beautiful bridge, so let’s make the most of it and highlight it. I really feel very proud of our bridge.”

The county council, which owns the bridge, is supporting Mr Hemsley’s proposal.

The authority was set to remove the fairy lights during a routine inspection in November but changed its mind after talks with the artist, who argued his scheme had widespread support and was similar to bridge illuminations elsewhere.

The council said it did not condone his decision to attach the two strings of 800 white LED lights to both faces of the bridge.

However, it wants to encourage tourism and promote historic buildings so it will support the application as long as it is backed by the planning authorities and statutory consultees including Henley Town Council.

Mr Hemsley must find funding for the upfront cost as well as maintenance, which he says will be thousands of pounds and much more expensive than the current lights but he will pay for the installation himself if necessary.

Last year, about 2,500 people signed an online petition to keep the lights.