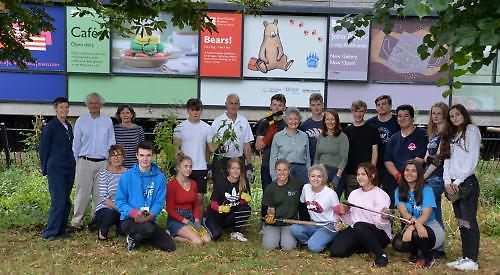 A team of 12 from the National Citizen Service worked alongside Henley Town Council staff and Henley in Transition’s conservation group to remove Himalayan balsam outside the River & Rowing Museum. The plant is invasive and makes it hard for native plants to thrive.

Other events to mark the week included a nature walk around Marsh and Mill Meadows, a butterfly count at Gillotts Field, a wildlife photography session and a teddy bear's picnic at the museum.

Ilona Livarski, the council’s conservation park warden, said: “We had been planning it for a few months and I wanted people to be more interested about conservation in Henley.

“We got the inspiration from the Berks, Bucks and Oxon Wildlife Trust, who do this thing where they encourage people to do something wild every day for 30 days. This is the first year we have done it and we hope to return next year.”

Mayor Ken Arlett, who helped with the work in Mill Meadows, said it was a positive way for young people to help the local community during the summer holidays.

NCS is a government-run scheme, which is open to teenagers and involves volunteer work for the benefit of the local area.

As part of the four-week course, participants also cleaned St Mary's Church and visited the 60-Plus Club.

Jack Botham, 16, from Woodcote, said: “We have one week where we go off and do extra-curricular activities and rock climbing. The third week is planning community service and the fourth week is carrying it out.

“I have made some really good friends and I would say that has been the best part of the experience.”