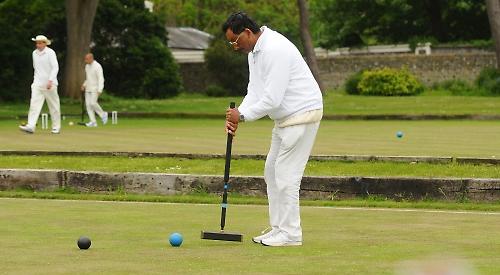 RAOUF ALLIM, of Phyllis Court Club in Henley, was knocked out in the semi-finals of the national selectors Second Eight competition last weekend.

He was the only one of three local players selected who actually made the long journey to Pendle in Lancashire for the prestigious event.

Allim led the exclusive field at the end of the first day of three, consolidated that by the end of day two and won the all-play-all qualification block with victory in his final best-of-three match on bank holiday Monday.

He qualified as top seed for the semi-finals but then came unstuck against last season’s award-winning most improved player Stuart Smith, from Sidmouth, whom he had beaten in the earlier phase of the event.

Allim’s ranking will improve on the back of this result as a second measure of his fine season after he became the first Phyllis Court player to reduce his handicap to minus three.

There was another dose of good news in the GC All England Handicap competition where Helena Fensome edged out Phyllis Court club-mate Dianne Browne by a net hoop advantage of one, to qualify for the national final, where she will join Roger Goldring who secured his place two weeks ago.

Fensome’s success came behind defending champion Simon Carter who showed no sign of tiredness following a good show at the recent world championships. Fensome and Goldring will compete against 14 other qualifiers from four area finals, in the finale of the season at Camerton and Peasedown CC, near Bath, on September 14 and 15.

Meanwhile, the national B-Level Series played out its final tournament of the season at the Hurlingham Club, Putney, last weekend and Raghu Iyer carried the Phyllis Court flag into action.

He won all seven of his games and carried that form into the best-of-three semis the following morning which he won in straight games.

With one eye on the tournament cup and the other on a winner’s qualification place in the B-Level Series national final, Iyer stumbled at the last losing 2-1 to Andrew Fall of Enfield, but did see his handicap reduce to three for the first time in his career.

Phyllis Court were dealt another blow this week when Robin Coates, who qualified for the B-Level national final some weeks ago, had to withdraw due to a non-croquet commitment.

A rarely played alternate-strokes doubles match was also played for one of the Barnses Cups and AC newcomer Roger Goldring won with partner Frances Colman, who defeated the Dianne Browne and Chris Roberts combination.