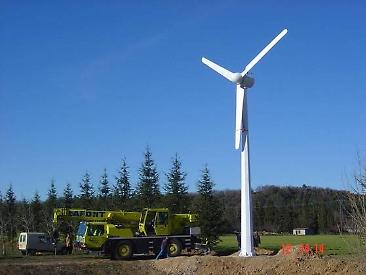 The Climate Emergency Working Group is devising a series of projects to help reduce the town’s total emissions, or carbon footprint.

This could mean installing solar panels in public buildings such as schools and erecting one or more turbines as a source of renewable energy.

A meeting of the group last week heard that it would be difficult to find a suitable location in Henley for a
turbine.

Patrick Fleming, secretary of the environmental group Henley in Transition, said that some farmland in Wokingham borough could be the answer.

He said he had contacted John Halsall, leader of the borough council, who was “happy to have a chat about it”.

But he added: “If we are going to put windmills on his land, we are going to have to do some persuading.” Mr Fleming said members went to see the wind turbine at Green Park in Reading and were “astonished” by how quiet it was.

The capital and installation cost for this turbine was £2.3million, although used models were cheaper and there was a “thriving” second-hand market.

Mr Fleming said: “Generation one turbines sound like diesel lorries and make lots of noise, which would be really infuriating for anyone living nearby.

“Generation two turbines are operated electronically and make hardly any noise. We were astonished by how quiet they are.”

One wind turbine would reduce Henley’s carbon footprint by 1.7 per cent.

Chairman Tony Hoskins said: “You will probably have to have a few of those.

“We have got to be clear how we are going to achieve it and set out what resources we are going to need. It really puts into context how big a scale this project will be.”

Member Rebecca Chandler-Wilde said there were “lots” of funding options available, depending on what the group wanted to do.

She said: “There is funding to encourage households to improve insulation. Although it might not be sexy, it contributes to reducing Henley’s carbon footprint, which is what we are here for.

“The second type of funding is for councils and charities to set up renewable energy schemes.

“The good news is that the Lottery has just announced £100million of funding for this initiative and is looking for communities and taking applications in the autumn.”

The meeting heard that the installation of solar panels could be funded by a zero-interest loan but that larger sums of capital funding would be required for some other projects.

The meeting also heard that it was important to recruit other residents.

Mr Hoskins said: “We do need to recruit individuals in the community who are interested and are willing to take forward certain projects. We can’t assume that because we are having chats around this table that we are going to get things done.

“We need to ensure that the community engagement project is executed properly. For residents in particular, it is critical.”

“We want them to understand what we are doing and why we are doing it,” he said. “Maybe it would encourage them to participate in some of the schemes we are looking to run.”

The group will next meet at the town hall on Wednesday October 9.