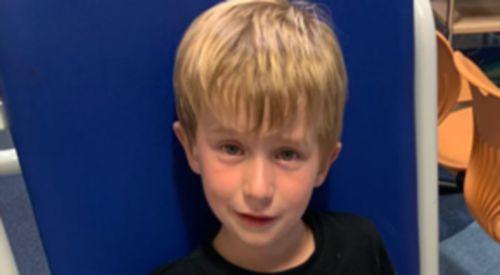 A WOMAN has branded the minor injuries unit at Townlands Memorial Hospital in Henley “absolutely useless”.

Judith Phelan spoke out after she and her grandson went there for treatment on separate occasions in less than a month but both experienced a lack of urgency by the staff.

She had to wait almost two hours to be seen for a finger injury despite the unit being almost empty while grandson Max Babbayan was unable to wait any longer to be seen as he was in agony from a broken leg.

Mrs Phelan, 71, of Deanfield Road, Henley, was with six-year-old Max when he was taken to the hospital in York Road on Saturday after breaking his leg while playing at the adventure playground in Mill Meadows.

Max, who was visiting his grandmother with his father Andrew and brothers Louis and Raffy, was injured when he jumped from a ramp on to the bark chippings. Mrs Phelan said: “When he fell he screamed and then continued to scream. My son was halfway back to the Chocolate Café, where he had parked, and came thundering back because he could hear the screaming.

“He then carried Max back to the car and got us all in. We actually had the windows down going along Duke Street and the blood-curdling scream was making people look at the car.”

The retired teacher said the
X-ray department at the hospital was closed as it was the weekend but added: “We didn’t know if Max had broken his leg but, rather than go all the way to Reading, we thought it would be better to go to Townlands and get assessed. It just seemed the best idea to go there and see what they could do. In retrospect, we should have just dialled 999.

“We got to the hospital at about 11.30am. I stayed in the car with Louis and Raffy and Andrew ran in with Max who was still screaming.

“He reappeared, saying ‘they’re about as useful as a chocolate teapot’. I went in and spoke to the receptionist and said ‘couldn’t you at least give him some pain relief?’ and she said ‘not until he has at least been assessed’.

“There was just a total lack of care or empathy. I’m sure they pride themselves on being unflappable and totally calm while doing absolutely b***er all.

“There was nothing happening and hardly any patients — there was just one person waiting. Why is there no triage system, no friendly nurse coming out to assess on arrival, no offer of pain relief or an ambulance?

“I think the minor injuries unit is absolutely useless — it’s hardly worth visiting.”

At the Royal Berks, Max was triaged and given pain relief almost instantly and was then quickly treated.

He was diagnosed with spiral fracture of the tibia and is now back home in Hove, East Sussex, recovering after receiving further treatment at a local hospital.

The incident happened less than four weeks after Mrs Phelan had visited the unit after cutting a finger on her right hand while working at the Oxfam shop in Falaise Square as a volunteer.

She recalled: “I put my hand into a bag which had something sharp in it. I think it was off a tube of tennis balls.”

Unable to stop the bleeding with plasters, she walked to the hospital in the hope her finger could be bandaged.

Mrs Phelan said: “As I entered, arm aloft to try to stop the bleeding, which was still trickling down my arm and dripping on the floor, there were two people at reception deep in conversation.

“After a while they noticed me and then, as I evidently couldn’t fill in the form myself they did it for me before asking me to go and sit down and wait.

“There was a notice saying I would be seen in an hour-and-three-quarters. There was one other patient.”

About an hour later a member of staff approached Mrs Phelan to tell her that she didn’t appear on the NHS database. It turned out that her name had been misspelled on the form when it had been filled out for her.

After this, a receptionist changed the waiting time notice to two hours but she was eventually seen and had skin-closure strips applied to the wound.

Mrs Phelan said: “My injury was indeed minor — ‘exactly the sort of thing the unit was set up for’, my paramedic said.

“I was totally happy with his care but why had it taken so long for me to see him? The treatment room was empty apart from me.

“Two nurses were on computers in the room next door. By this time two other people were waiting outside, although a third person had given up and gone home.

“I was in and out in five or six minutes because it was a straightforward cut. I’ve got no complaints about what he actually did but just why it took so long to see someone.

“They always seemed to be doing something but it was at zero miles an hour.”

Mrs Phelan said her son had a similar experience at the minor injuries unit in 2017 after getting something in his eye during the Henley to Marlow swim event.

She said: “His experience was much like mine — incredibly slow. I think three people were treated that Sunday afternoon.”

Mrs Phelan added: “When the person who was in front of him came out it was 40 minutes before he was called in. When we queried this they said it was because of the paperwork.

“I have lived in Henley since the Eighties and with three children, their friends and cousins I had cause to dash one or other down to the old Townlands on many occasions and we were usually back home within half an hour.

“The new unit’s just not worth having really. I think it’s easier to go straight to the Royal Berks.

“I wonder if they have been told ‘if you don’t fill the time we’re going to close the unit’. I can’t imagine why they are so slow.”

Earlier this year, an NHS campaign in Oxfordshire urged people with non-emergency health problems to visit minor injuries units rather than accident and emergency.

A spokeswoman for the Oxford Health NHS Foundation Trust said: “We are always sorry to hear if a patient’s experience at the Townlands Memorial Hospital minor injuries unit hasn’t been what they had wished for.

“If their experience has been disappointing, we encourage our patients to give feedback through our patient advice and liaison service.

“We also welcome reviews of our services on the NHS website, where the majority of feedback on the minor injuries unit has been positive.”