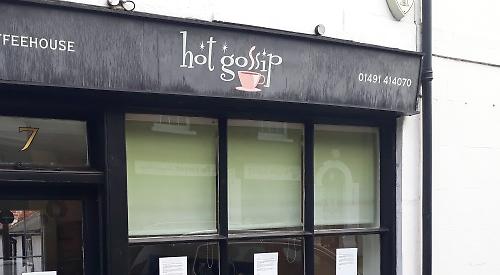 Hot Gossip is moving from Friday Street, where it has traded for the last 12 years, to the former Bohun Gallery premises in Reading Road.

The café closed on Monday last week and will re-open next month.

Owner Lorraine Hillier, who is a town councillor, said the landlord of the Friday Street building wanted to convert the top floor, which she used for storage, back into a flat and she wanted to reduce her overheads.

Miss Hillier, 63, said: “When I opened 12 years ago in Friday Street I was fortunate to have a landlord prepared to take a chance on someone with no trading history, for which I was grateful.

“There are other plans for there now and, as I am not quite ready to retire, I am delighted to announce we have found a new home around the corner.

“We wish to thank all our customers, whom we consider to be good friends, for their support over the years and we look forward to welcoming you at the new premises when we re-open in October.”

Miss Hillier, who lives in Nettlebed, has signed a 10-year lease on her new premises which will take about five weeks to fit out.

She said: “It has a smaller but sunny garden so while I lose some seating overall, there will be more in the café itself. I like old buildings and this new one was a very successful art gallery. It is in a good position and there is probably more passing trade there.”

She said the décor would reflect her personality, explaining: “I liked the cafés of the Fifties and Sixties and the new space will work better.

“I come at it from a creative angle, which is why we have things like the jukebox and memorabilia on the walls. I’d always loved the Beatles and George Harrison and Joe Brown. I had a strong music theme.

“I would always get told off by the young staff who would want their own kind of music on and then I come in and put on something different. “

Miss Hillier said she enjoyed working for herself.

She said: “Every day I am thinking about my orders and it would be strange for me not to be doing it. I am naturally an active person — I am not someone who can sit and do nothing or just be a lady who lunches.”

Between 2013 and 2017, she also ran Upstairs & Downstairs, a tea room which is now Drifters independent coffee shop.

Miss Hillier said: “I have always been a bit of an entrepreneur, although I haven’t always been successful, but I’d rather try and fail than do nothing at all.

“Hot Gossip did work and I hope it will continue to do so. That’s the one thing in my life I have got right and I am positive about the future.”

Miss Hillier, who was Mayor in 2015, said she would ask the Mayor Ken Arlett to officially open the new Hot Gossip as the retired builder fitted out the original.

Meanwhile, a clothing and antiques shop in Friday Street could shut after just over a year of trading.

The Vintage Vogue unit, which opened in June last year, is back on the market to be let as joint owner David Eggleton is stepping down to focus on his other ventures.

John Pacitto, who succeeded Janet Middleton-Stewart as his business partner in October, hopes to continue selling just antiques from either that site or a vacant unit near the town hall in Market Place.

The pair’s contract on the premises, which previously housed the Boatique gift shop, expires next month and Mr Pacitto, a semi-retired publican, says he will have to agree a more “favourable” rent at either location if he is to continue.

He and Mr Eggleton, a town councillor, were running it with help from Mrs Middleton-Stewart, who continued running her clothing venture the Willow Dress Agency under the same roof.

They say the antiques trade was profitable but they needed more help and the rent was too high to justify hiring a manager or assistant.

If the shop stays open, Mrs Middleton-Stewart could work there for most of the week with Mr Pacitto filling in. She would not sell dresses as she says this wasn’t making money due to competition from nearby charity shops.

He said: “John seemed to be doing quite well but, sadly, there weren’t enough hours in the day for me. It’s a question of how much staffing was reasonable as it wasn’t warranted to put a manager in there.

“It’s a shame because everyone who came in really loved it. They say Henley needs more quirky antique and curio shops but unfortunately the rents were too high. I know landlords need to make money but if they could compromise and work with businesses you wouldn’t have units becoming empty.”

Mr Pacitto said: “I’ve applied for another shop and I’m waiting to hear back from the agent although another option could be to run Vintage Vogue from here on my own.

“I’m retired and don’t want to be in here full-time but I was thinking of having Janet in for a few days and me doing a couple. If we get a reasonable offer for where we are, we could stay.”

Mrs Middleton-Stewart, of Meadow Road, said: “We’ve built up a good business in as much as we’ve got lots of lovely customers, but if we have to pay someone to run it then it’s no longer a goer.”