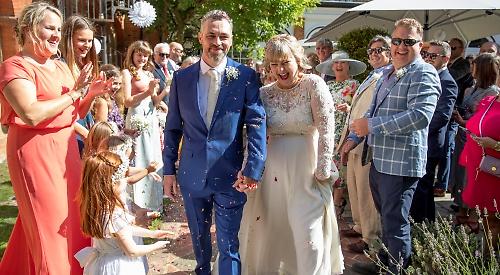 A COUPLE who won their wedding in a competition say the occasion was the best day of their lives.

Kate and Glenn Dixon, of Greys Hill, Henley, celebrated the big day at Badgemore Park on Saturday surrounded by friends and family, including their two young children.

The bride, who celebrated her 37th birthday the previous day, said: “It was so emotional and everything was just so beautiful.

“Everybody was saying how magical the day was and how they had never been to a wedding that was just so full of love.”

The couple, who had been engaged for eight years, were unable to afford a ceremony of their own but won a £10,000 prize competition run by the venue earlier this year.

They thought it was a prank when they were told the good news but then began planning for the day.

The prize included the ceremony and evening party and disco, hairstyling and a bridal bouquet, wedding cake of their choice, two VIP airport lounge passes and £100 towards their honeymoon.

Mrs Dixon said: “We are so lucky. It has just been the most intense, crazy, but completely magical experience. It has been so full of love and generosity.

“When I finally got there and saw Glenn it was so emotional and everything was just so beautiful. Badgemore did the most amazing job.

“A lot of people have gifted us their time and expertise. The prizes were absolutely incredible and we have just been blown away by the love we have been shown.”

Mrs Dixon celebrated her birthday on Friday with lunch with her mother and sister at the Villa Marina restaurant, where Mr Dixon proposed in 2011.

She then spent the night with her husband and their children, Betsy, five, and Harry, two, at home before leaving early on Saturday for her sister’s house in Henley to have her hair and make-up done.

Her friend, Morag McLaren, arrived in a Mercedes later and took them to the venue.

Mrs Dixon wore an ivory long-sleeved classic dress with a beaded top. The flowers were a mixture of jasmine and roses and the bridesmaid’s bouquets were daisies.

Mr Dixon, who wore a navy suit with a white shirt and ivory knitted tie, said: “My eyes welled up when I saw her in the dress and the music started playing. She just looked absolutely incredible.” Mrs Dixon, an account manager for Primary Times magazine in Henley, was given away by her mother, Sue Fixsen, from Wallingford and the ceremony was conducted by John Jones.

She said: “The ceremony was short and sweet and probably only lasted 20 minutes. There were two readings. One by my brother Steven and the other by my cousin Alice Fixsen.

“Steven read from the Amber Spyglass by Philip Pullman, which is very romantic, and Alice read a poem by John Cooper Clarke, which was fun. She also stood at the front of the room with a copy of the Henley Standard from last week with us on the front page and pretended to read it. My mum and Glenn’s mum were the witnesses for signing the register.

“My mum bought the rings. She got me a white gold diamond band from the Twenties and had Glenn’s ring made, also white gold. We both love the rings so much.”

Betsy, who attends Sacred Heart Primary School, was a flower girl and when she was given a ring to hold, her brother said he wanted one too so Mrs Fixsen gave him one of hers.

At the reception, the guests enjoyed chorizo scotch eggs and beef wellington. The couple had a three-tier wedding cake, with layers of chocolate, strawberry and Prosecco and carrot flavours.

Their first dance was performed to Song for Zula by Phosphorescent. Mr Dixon, who is a Sky TV engineer, said: “That song is the first on the album and we really liked it. We had a moment where we looked at each other and said, ‘if we ever get married, this has got to be our song’.”

The 80 guests included Mrs Dixon’s brothers Steve and James Terry and sister Sarah Butcher, who all live in Henley, as well as her eldest brother Shane and father John, who came over from Ireland. Mr Dixon’s parents, John and Maggie, who live in Chipping Norton, attended along with his brother William, who was the best man.

The celebrations continued into the evening with an inflatable photo booth, which provided the couple with a cherished memento of their special day.

Mr Dixon said: “At the end of the night I went in with Kate and we had our picture done and the lady with the book said it would be on the last page.

“The book was full of lovely comments and pictures and we just happened to get our photo on the last page by accident!

“The next day we had this instant photographic memory of not just our night but everyone else’s.”

The couple have their heart set on a honeymoon to see the Northern Lights.

Mr Dixon joked that they might win another competition.

He added: “We have always wanted to go and we have November in our mind.

“Sometimes you can go and not actually see them — you have got to be lucky but I think winning this wedding has shown that we are very lucky.”