Artist turns off lights on bridge 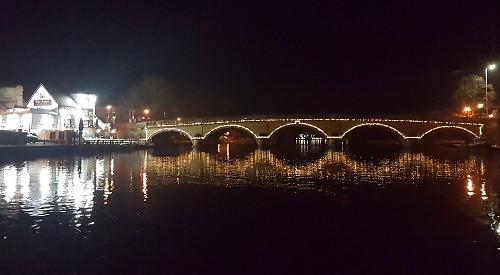 LIGHTS which were installed on Henley Bridge without permission have been switched off.

Clive Hemsley, who attached the strings of LED fairy lights to both sides of the Grade I listed structure last year, cut the power on Friday.

The artist, of Hart Street, Henley, planned to take them down this week but Oxfordshire County Council, which owns the crossing, has agreed to do that when it conducts a structural inspection of the bridge next month.

The lights were attached with a resin-based glue which Mr Hemsley says can be removed without damaging the stonework. He says he and a council engineer have detached several without difficulty.

More than 2,000 people signed a petition to keep the lights in place and the county council backed the idea in principle.

But, as the Henley Standard reported last week, Wokingham Borough Council, the planning authority, refused to give Mr Hemsley listed building consent to drill into the mortar and attach something more
permanent.

It said he hadn’t provided enough detail about the work and it wouldn’t conserve or enhance the bridge’s character so the possible harm couldn’t be justified.

Mr Hemsley said he would probably not appeal or submit a new application but he hoped that the county council would address the “poor” condition of the bridge, caused by collisions with passing boats.

A number of hamstone tiles are missing from inside the central arch and the cladding on a south-facing pier near the royal regatta headquarters has been scraped off.

The council says the inspection is part of a planned programme of works to assess every structure it owns.

• In last week’s article, it was stated the chairman of Henley Archaelogical and Historical Group was Joan Whiting when in fact it is John Whiting. We are happy to set the record straight and apologise for any embarassment caused.