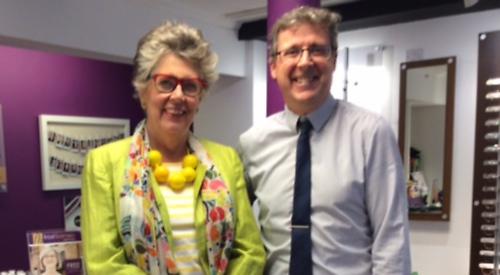 PRUE LEITH used the opportunity of her appearance at the Henley Literary Festival to check out her new collection of glasses.

The Great British Bake Off judge surprised the staff when she dropped into Frost Borneo Opticians in Hart Street.

Optical assistant Jill Clark had spoken to her on the phone earlier when she rang the practice to ask if it was stocking her range, called Prue by Ronit Furst.

“I recognised her voice,” she said. “When I said we had them she put the phone down and I didn’t think anything else would come of it.”

Leith, 79, who is known for wearing brightly coloured frames, walked in wearing a large boot after she snapped her Achilles tendon while filming the latest series of the Channel 4 show.

Jill said: “She explained how she hurt herself while dressed as the lion for a Wizard of Oz sequence.”

She then posed for pictures and was introduced to Neil Frost, one of the partners of the business.

Jill said: “I thought it was very entertaining. She talked about her upbringing in South Africa.

“She has such a wonderful personality and always wears such colourful clothing.”