Woman recovering from cancer devastated by loss of pet cat 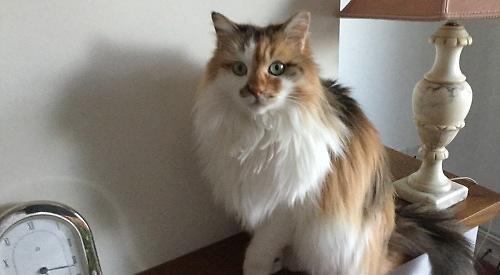 A WOMAN recovering from cancer surgery has been left “heartbroken” after her cat went missing from her home in Henley.

Valerie Howes says 10-year-old Millie is her only companion.

The long-haired moggie, which is white, ginger and black, vanished on the evening of October 20.

Mrs Howes, 82, has asked her neighbours in The Close to help search for her pet and is offering a £500 reward for Millie’s safe return.

She said: “In the first couple of days I went mad. Unless you have a pet, you don’t realise how much you can love an animal. It is like loving a child to me.

“She will sit on the arm of the chair and sleep by my head at night. I just feel absolutely exhausted with worry.”

Her son Stephen rescued Millie as a kitten while he was working in Shanghai. He used to feed sick and injured animals and found her with a broken leg.

When he had to move to Kuala Lumpur for work in 2013, he was unable to take Millie with him, so he arranged to have her sent to England.

She was flown 7,500 miles from China to Heathrow Airport and then transported by courier to her new home in Henley.

Mrs Howes, who has owned cats all her life, said: “Stephen found her outside a restaurant. He was very kind to her and when he had to move he asked if I would look after her.

“He had to fill out lots of paperwork and she had some injections.

“In the early days she was a little bit spiteful and wouldn’t sit on my leg like all my other cats did.

“Now we have a routine and it is so quiet without her. She is not the sort of cat to go wandering for days at a time and then come back.

“In the six-and-a-half years I have had her, she has never stayed out all night once.

“I am heartbroken. She is not very valuable but she means the world to me.

“Not knowing is the worst part. If I found out she had been run over I could live with it but your mind starts racing.”

Mrs Howes had to have her colon removed in an operation at the Royal Berkshire Hospital in Reading after being diagnosed with bowel cancer in June.

She spent only a week in recovery and then rushed home as she could not bear the thought of being separated from Millie any longer.

Her daughter Sarah Sherred, who lives in Somerset, said: “She was on a ward with lots of other women who were much younger than her and some of them had been in there for months.

“She came home after a week. She was just so desperate to get home to see her cat. We are all cat-mad in our family.

“My mother was so happy to have Millie because she had just lost her old cat.

“She is not one to go out and socialise, so the cat is her constant companion.

“She would not even agree to come to see me at Christmas because she didn’t want to leave the cat by herself.

“This cat is her life and I am worried that without it she will give up.

“I have never seen my mum cry, apart from when my father died. She is just crying all the time. It is like all of the life and the spark has gone out of her.”

Mrs Howes, who has been given the all-clear but still has to have regular hospital check-ups, said Millie does not have a collar but she is microchipped. She walks with a limp in her front left leg.

She added: “I can’t imagine what has happened to her. If she has been locked in a shed she won’t survive for very long.”