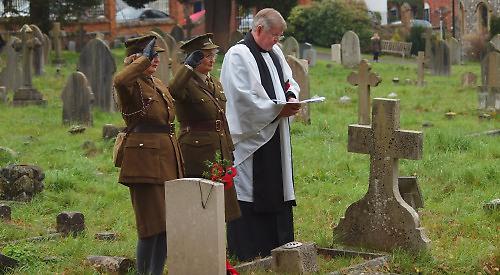 A MEMBER of the Home Guard who survived the Great War but later died in a training accident was honoured in Henley.

A service was held by the Oxfordshire Home Guard Living History Group at the grave of Sergeant Charles Lewington in the Holy Trinity churchyard, off Greys Hill, on Saturday.

Sgt Lewington grew up in Henley and was the third of seven children to George and Kate Lewington who lived in South Hill Gardens, believed to be in the Greys Road area. He worked at a grocer’s before joining the army. He served with the 9th and 15th battalions of the London regiment through the Great War and was awarded a Military Medal for his bravery.

He returned home, married Jeanne Louise and settled in Bayswater in London.

During the Second World War he joined the Home Guard and it was on a training exercise that he and four colleagues were killed in Richmond Park on May 17, 1942. He was 49.

His grave has a Commonwealth war grave headstone. The service included a reading of the poem For the Fallen by Laurence Binyon, a presentation of arms and the reading of the Kohima Epitaph followed by a two-minute silence.

Women from the Auxiliary Territorial Service, the women’s branch of the British Army during the Second World War, laid a wreath on Sgt Lewington’s grave and took the salute.

Rev Duncan Carter, the vicar at Holy Trinity Church who led the service, was already familiar with Sgt Lewington’s story.

He said: “He survived the whole of the First World War and was killed in a training accident. He was on a cooking course and explosives ended up in the fire.

“The history group brought about a dozen people along, including a couple of youngsters.

“It’s very much trying, through dressing in uniforms of the time and so on, to bring alive the people and the significance that they had given their lives in service of their country.

“We have remembered a number of unmarked graves in the last few years and it was lovely to remember one of the Commonwealth war graves in Trinity churchyard. We have 15 and it’s lovely to see people take an interest in their lives and honour them.”

The group’s aim is to preserve and promote the memory of the Home Guard and the home front in general.

Mike Quigley, who has the rank of sergeant and is an instructor with the Oxfordshire Army Cadet Force, said: “I’ve known about Sgt Lewington for a while because each year we always take the cadets around some of the war graves.

“About five years ago I recognised that he was a home guardsman. This year I was determined to commemorate him.

“The Home Guard played a vital part in the war effort. Up to 1,600 men were killed as part of their duty. A lot of them were training accidents, some were air raids and some were quite elderly so after a long day at work they were exhausted so maybe had heart attacks.

“They were men who, after the First World War, put their lives back on the line and that bravery needs to be recognised.

“We also want to educate people. It wasn’t all old men — most men had their first training in the Home Guard before they were sent off to war.”

Mr Quigley, whose four great uncles served in the Blewbury Home Guard, added: “I was very proud, it was well worth the effort on our part and Duncan was absolutely splendid.

“All the graves are marked with poppies every year but just to have that recognition from the Home Guard unit I thought was very moving and gave us great satisfaction.”

Next year is the 80th anniversary of the Home Guard and Mr Quigley said the group hoped to repeat the commemoration then and involve some of Sgt Lewington’s descendants.

It also hopes to honour Herbert Hook, a member of the 7th Berkshire battalion, whose name is on a Commonwealth war memorial in Caversham.