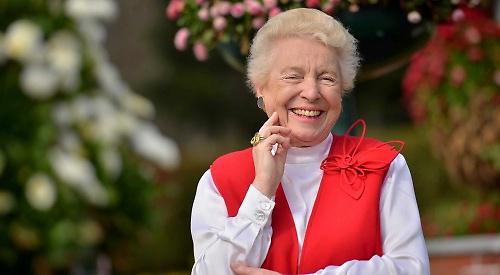 Dame Stephanie, née Buchthal, says this was considered an “epic” length of time in those days but their relationship took a while to blossom after they initially met as colleagues.

They were both based at the Post Office Research Station in Dollis Hill, where she built computers from scratch and programmed them in binary code.

At the time she was struggling to understand waveguides, a complex type of technology which could be used to improve long-distance telecommunication.

A colleague then introduced her to her future husband, a physicist who was working with the technology in another department and attempted to explain it to her.

Dame Stephanie said: “We were introduced professionally, although I don’t know whether my friend had ulterior motives. To this day I still don’t understand waveguides, but never mind —  I married him!

“It was a very slow process because we’re very different people and Derek is very shy. It took a long time before he could even look me in the eye but it went swimmingly once it got going.

“In the early days I was living in a bedsit in Cricklewood and he was living with his parents in Queensbury. I think he proposed just by blurting it out when he was round at my place one day.

“There was none of this getting down on one knee as he isn’t particularly romantic but of course I said ‘yes’ immediately.

“His surname has always caused a lot of confusion, especially since my dameship. I get a lot of people calling me ‘Dame Shirley’ or just ‘Shirley’ but I don’t mind. I’ll answer to anything.”

The couple spent their honeymoon at the Great Fosters Hotel in Egham and had their only son Giles in 1963, the year after Dame Stephanie founded her software company Freelance Programmers.

She predominantly employed women, having experienced sexism in her early working life, and adopted the alias ”Steve Shirley” because she received fewer replies when writing to business contacts as a woman.

The couple retired to Henley in 1995 to be nearer their son, who had a severe form of autism and was under the care of the old Borocourt Hospital at Wyfold Court.

He died of complications from the condition three years later and they have since founded three charities, Autism at Kingwood, which supports 250 adults across southern England and runs a college in Reading, rior’s Court Special school near Newbury and the research charity Autistica.

Dame Stephanie has given away more than £67million of her personal wealth to autism-related causes.

She and her husband celebrated their anniversary with a glass of champagne with neighbours and will be joined by friends and family at a private function at Woodland Lodge, near Fawley, tomorrow. Dame Stephanie said: “Our marriage has succeeded as we have complementary characters — I look at things from the top down whereas Derek is more ‘bottom up’. I’m very positive and he’s more cynical.

“We can argue to the death about a lampshade but we essentialy agree on the important things, which is a good way to go about life.

“We don’t bore each other because we have interests in common but also enjoy different things. I also don’t believe couples who say there’s never a cross word between them — it sounds very boring!

“Losing our son was a truly dreadful thing but we made a life without him and he is the glue that holds us together. It is satisying to feel that we have made something out of the tragedy.

“Wherever I go in the country, I’m always close to a project that I’ve been involved with at some point and all our anniversary gifts will be going to Autistica.

“There aren’t many things we want at our stage in life and we would rather that any contributions go towards helping others.”

• Dame Stephanie spoke about her memoir, Let It Go, which is being made into a film, at this year’s Henley Literary Festival.