Reindeer to be at festival despite 300 complaints 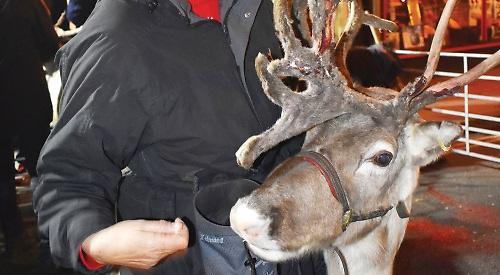 REINDEER will appear at the Henley Christmas Festival despite hundreds of complaints from animal lovers.

The animals will lead the children’s lantern parade from the River & Rowing Museum and then will be in a pen in Friday Street for people to see and stroke.

They proved to be a popular attraction at last year’s festival.

The town council, which organises the event, had considered not bringing back the reindeer after receiving more than 300 complaints.

These were predominantly submitted by email in a standard format consistent with a template on the website of Freedom for Animals, the working name for the Captive Animals’ Protection Society, which aims to end the captivity of all animals, especially those used for entertainment.

Thames Valley Police contacted the council to ask if additional security measures were being put in place at the event in case of a protest. But town clerk Sheridan Jacklin-Edward said the reindeers’ appearance presented a “very low risk” to their welfare and to the event.

In a report to the council’s town and community committee, he said: “While reindeer may be a valuable element of the Christmas Festival, the council prioritises the welfare of animals above any entertainment value.

“As such, an evidence-based approach has been taken to analyse the concerns raised about the potential welfare issues surrounding the use of reindeer at Christmas events, identify what measures have been taken to mitigate any risks to the animals’ welfare and assess what risks remain.

“In addition, consideration has also been given to the risk of any civil disobedience.”

He said Riverways Farm in Twyford, which supplies the animals, had a licence from the Government to keep reindeer subject to conditions, including that the animals are kept clean and comfortable and transported and handled in a manner that protects them from pain, suffering, injury or disease.

The RSPCA had said that, generally, reindeer were very susceptible to health and welfare problems and that they need specialised care as they were easily stressed.

The charity said they were often transported long distances and spent time in small pens and were exposed to busy environments, surrounded by crowds, noise and lights.

Mr Jacklin-Edward said the Riverways reindeer would only be paraded a short distance before the festival and would not be used to pull a sleigh.

He continued: “During the festival they are kept away from the louder, brighter festival events and late-opening shops on a side street.

“They are not kept inside, but in a more appropriate cooler, darker atmosphere. They are on display for only a short time — 5pm to 8pm. They are transported only five miles, a journey of less than 20 minutes. They are supervised at all time by competent handlers, who control access and interaction with members of the public and monitor their health.

“Given the measures taken to mitigate the risk highlighted by the RSPCA and that the activity has been licensed, it is felt therefore that the concerns highlighted have been adequately addressed.”

Mr Jacklin-Edward said he had also considered the risks to people attending the festival and to council staff and property in the event of a protest.

He said: “It is believed that the threat of such action is low, given that the current campaign by Freedom for Animals is longstanding, that reindeer have been used by the council in preceding years and, to our knowledge, there have been no reports of protests or other action at other events.”

He said police would be at the event and Riverways Farm had put measures in place to ensure the reindeer were protected and could be taken away at short notice if necessary.