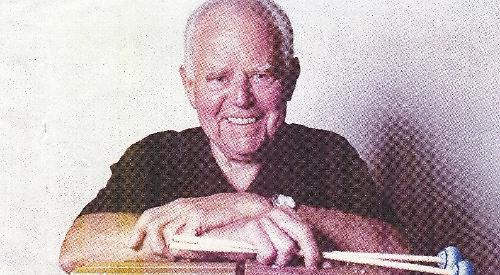 AT a recent meeting of Henley Rotary Club, members were delighted to welcome as their speaker the well-known jazz musician and Paul Harris fellow Alan Grahame.

During his talk, Alan painted a vivid picture of his life as a performer, starting when he joined his parents in their amateur shows.

He was a runner for the Home Guard and a sergeant major in his school cadet corps.

When he was called up, his army friends formed a band and found a vibraphone for him. He quickly mastered this.

Once back as a civilian, he became a professional jazz musician, touring with popular pianist Ralph Sharon.

When Sharon went to America, Alan joined Jerry Allen to form the Jerry Allen Trio who toured with the Benny Hill Show. This is when he met his future wife Dulcie.

The trio continued to tour and broadcast and for seven years. They played on the ATV show Lunchbox, doing five live performances each week, playing, singing and adding comic interludes.

When the show closed, Alan freelanced and appeared on Playschool, How and Top of the Pops as well as on and stage, radio and other TV shows.

He then toured with many stars including Perry Como, Bing Crosby. Peggy Lee, Tom Jones, Shirley Bassey and Howard Keel.

A family man, he has three children, all of whom are in showbusiness.

For his great contributions to the Rotary jazz nights at Christ Church in Henley and his help given to young musicians, Henley Rotary Club made him a Paul Harris Fellow.

The vote of thanks was proposed by club president Barry Prior and supported enthusiastically by all present.