Turkey winner keeps it in the family 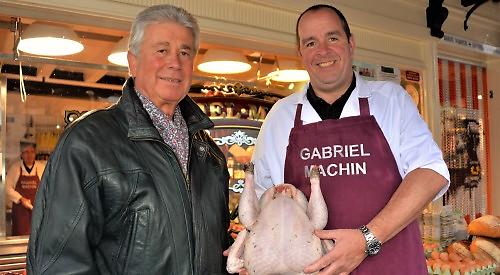 A MAN has won the Henley Standard’s Christmas turkey competition the year after his daughter won the same contest.

John Ferebee, who lives in the town with his wife Angela, was encouraged to enter by Karen Ferebee, the previous winner.

He was shocked to hear he had won after correctly answering that the bird weighs 6kg and he says it will feed about 12 people on Christmas Day.

Mr and Mrs Ferebee, who were among dozens of entrants from the area, will be celebrating Christmas with Karen, their other grown-up children Dawn, Joanne and Paul, and their grandchildren.

Their prize, which is from Starveall Farm in Upton, comes with 24 chipolatas, 24 rashers of bacon, a 200g jar of goose fat and a 250g jar of cranberry sauce. Machin’s turkeys are so popular that a large queue builds outside the shop in Market Place as people collect their orders every year.

Mr Ferebee said: “It’ll be a fairly normal lunch for us. Angela normally takes care of the food while I do the drink so that’s one thing crossed off the ‘to do’ list already!

“I was delighted when I got the call saying I’d won. I’ve never entered before, although Karen won last year and I hope people don’t think there’s some kind of conspiracy!

“It’s lovely to have something from a traditional butcher. I haven’t shopped here all that often but it reminds me of when I was young and my dad ran a butcher’s in south London.

“I used to help with things like making sausages or doing the delivery rounds so it really does take me back.”