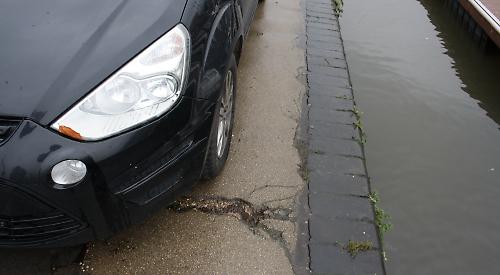 A FORMER Henley mayor says the lives of pedestrians are being put at risk until bollards which are used to line the riverfront are replaced.

Pam Phillips, of St Mark’s Road, says drivers park on the pavement in Thames Side so that wheelchair users or people with prams and buggies have no choice but to walk in the road.

She says she was forced to do this while pushing her 10-month-old grandson Thomas Westwood as three vehicles were blocking the way and she feared for their safety. The stretch of pavement near the junction with Friday Street was previously separated from the road by small metal posts linked with a chain but these were removed a few years ago after being repeatedly knocked over by vehicles.

Now the town council is to spend £9,089 on installing 27 new cast iron bollards and repainting the 53 existing bollards immediately to the south.

Mrs Phillips, who was mayor in 2011 and lost her council seat in the 2015 elections after standing as an independent, says the work should be carried out as soon as possible.

She said: “It’s frightening having to step into the road because you can’t always see what’s coming but there’s no choice as they haven’t left enough room to get by.

“I saw another woman coming the other way and she was having to do the same thing. We both agreed it was horrific and there have been cases of people being killed walking around parked cars.

“Pavement parking seems to be a problem all over town because there’s no one around to give out tickets or fines.

“There have been various suggestions like increasing the number of parking spaces but that’s a separate issue — in this particular instance we just need bollards as soon as possible.”

The new bollards will be funded with money from developers paying the Community Infrastructure Levy. Oxfordshire County Council is responsible for pavements as the highways authority but declined to pay for the work.