Rowing coach helping sport to truly give back 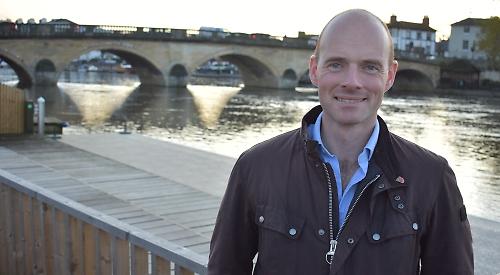 ROWING coach Steve O’Connor is giving back to the sport that helped him to succeed.

He was introduced to it at his state school about 20 years ago and went on to win three national championships and compete at Henley Royal Regatta before moving into coaching.

Now the 37-year-old from Henley is opening up the sport to more young people as chief executive of Fulham Reach Boat Club on the River Thames in London.

The club is a charity that was formed in 2013 and has helped thousands of teenagers from deprived backgrounds to unlock their potential and learn valuable life skills through rowing.

He has been involved since the launch of the club, which was created as a result of an agreement between St George, which built the Fulham Reach development of 744 flats, and the London Borough of Hammersmith & Fulham.

At the time, he was coaching and development officer at Barn Elms Rowing Club in Barnes, further downstream.

Mr O’Connor recalls: “They hired me to come and write a development plan of what a community boat club could do and what it would look like.

“I thought it was a massive opportunity — one of my passions is about opening up this sport.

“I went to the Becket School in Nottingham, where one day I was told I was going rowing. We had one boat, one teacher and a parent. I then joined Nottingham and Union Rowing Club.”

He went on to Leeds University, where he continued to row and became captain of the boat club.

Mr O’Connor competed at Henley with Exeter, Fulham and London Rowing Clubs and met his wife Sarah at the regatta in 2008. They now live in Ancastle Green with their sons William, four, and Benjamin, one.

In 2011, he was appointed captain of London RC with whom he won his national titles.

Mr O’Connor says: “Rowing has taken my life in this great direction so I’m really keen to open it up to children in state schools, particularly those who aren’t perhaps good at kicking and catching.

“It gives these children another chance to try a sport they may well succeed at.”

The club was started with
£3million from the developer.

Mr O’Connor, who previously worked in sales and marketing, says: “I started off on my laptop in a one-bedroom flat, being told to go and create this charity. It was a blank piece of paper.

“It was really great to think ‘what needs are we going to address with this charity?’ It couldn’t be just be ‘how many children can we get rowing?’”

He brought in David Fitzherbert, whom he had coached at Barn Elms and who is now chairman of Fulham Reach BC, and bought all the equipment himself.

The club became a charity in February 2014, less than a year after it started, and later that year the clubhouse was officially opened by Dame Katherine Grainger, Britain’s most decorated female Olympian.

Mr O’Connor says that more than half of young people in the area around the club suffer from some level of deprivation that would have previously prevented them from accessing normal opportunities.

The club is about helping to improve their prospects.

“We are using rowing as a vehicle to teach them life skills because we think there’s no better teacher of that than the sport,” he says.

“We always try to get them on the water straight away — rowing machines come second.”

The club’s coaches use four key aspects of rowing that help: teamwork, focus, confidence and ambition.

This has helped to improve the youngsters’ levels of self-esteem, responsibility and organisational ability, according to their teachers. Mr O’Connor says: “Really the only time we see children working in teams is in sports and in PE and it’s usually a field-based sport.

“In a boat if your crew is level with another and you back off because you’re tired, then the entire crew loses.

“It’s an entirely different mentality — you are working so that you’re all successful and hope the rest of the crew are doing the same.”

The children start when they are in year nine and row once a week for six weeks to learn the basics. The course finishes with an informal regatta.

The club then asks all the participants if they want to continue and 80 per cent say they do. They can keep rowing until year 13.

It now works with 11 of the 12 state secondary schools in Hammersmith & Fulham borough and three more in neighbouring Kensington and Chelsea.

It has also started an open rowing club for adults and juniors.

Mr O’Connor says: “We decided not going to focus on racing but to focus on teaching people how to row and to welcome everybody.

“If we can open up the sport, from a rowing perspective, we start to ensure the longevity of it.

“We want people to have a really good time enjoying the sport and learning the basics and to take these other lessons away. If they go fast, that’s a lovely bonus.

“I’m surprised how readily the schools have bought into it — we have never had a school say ‘no’ to us.”

Of the 14 schools, half have created their own boat clubs.

“We see ourselves as the catalyst so we’re providing the fleet, the coaching and the administrative support,” says Mr O’Connor.

“The school registers itself with British Rowing as a boat club but all the practical elements of running the clubs are done with us. Nirvana for us is one of the schools turning around and saying, ‘we want to build our own boathouse’.”

Holiday Hunger attempts to combat the problem of children from low income or deprived backgrounds not having enough to eat during the school holidays. It is open to children receiving the pupil premium.

Mr O’Connor says: “You’ll have 11- or 12-year-olds left at home for the school holiday with an insecure food source.

“We thought ‘we have got this boat club which the schools aren’t using in the summer’.”

It accepted 15 different children a week for three weeks, providing rowing sessions, classroom lessons with the RNLI and police and three meals a day.

It also ran a prisons project working with its ambassador John McAvoy, a former armed robber who was given a double life sentence when he was 24.

He broke the British and world indoor rowing records while in prison and is now forging a new life as an endurance athlete and public speaker.

Mr O’Connor met him when he joined London Rowing Club.

In the summer the club ran a 10-week pilot with HM Young Offenders Institute Feltham, ending with an indoor regatta attended by members of the Oxford and Cambridge University Boat Clubs and Olympians Debbie Flood and Mel Wilson.

The prison service is now funding a new programme to establish a series of indoor clubs across the prison network, so they can compete against each other every week.

Looking ahead, the boat club wants to offer the same opportunities to students at the 52 state secondary schools on the Boat Race course.

It also wants to host a Future Blues Regatta and stage a relay row from Oxford to London called the Boat Race Future Blues Thames 100.

Mr O’Connor says: “The Boat Race goes past our door and it is interested in trying to open up that race as an event and give back to the community.

“Rowing is an expensive sport to get going but it’s not expensive to take part in.

“Your average state school can’t afford to build a boathouse and have boats and therefore they don’t get to have a chance at rowing. By creating Fulham Reach Boat Club we have taken that burden away from them.”