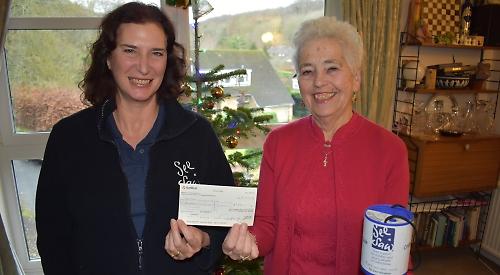 A CHEQUE for £1,800 has been presented to a children’s charity by the Henley Carol Singers.

The group raised the money for SeeSaw, a child bereavement charity, at six concerts in and around the town in December, led by conductor Wendy Hawkins.

The singers, who are all members of church choirs or the Henley Choral Society, have been performing together at Christmas time for more than 20 years and each year choose a charity to support. SeeSaw, which is based in Headington, provides grief support for children and young people in Oxfordshire through the use of specially designed books, games, memory boxes and jars as well as a therapy dog.

In the last year, it has supported almost 50 families in Henley and the surrounding area.

Judy Whittaker, co-ordinator of the Henley Carol Singers, said: “We particularly look for child-focused charities and child bereavement came up. It’s not a story you really want to hear about at Christmas time but that's even more reason why it’s good to support it. We’re singing at dinners and events where people are celebrating and you can have people who are going through the worst time of their lives.

“Thank you to the singers who turned out on wet and not very appealing evenings.”

Anne-Marie MacMillan, community fundraiser at SeeSaw, thanked the group and said the money would go towards training and equipment.