Oceans of children to take part in 27th youth festival 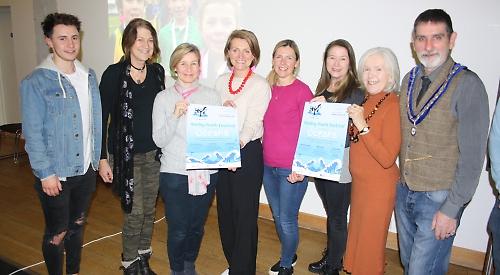 THIS year’s Henley Youth Festival has been officially launched.

The 27th annual event will take place at various venues from March 7 to 15 and will include school workshops, performances and competitions in the fields of music, dance, art, film and creative writing.

The theme is Oceans, which was inspired by David Attenborough’s
Blue Planet TV series and the effect of plastics on marine life.

Jo Dickson and Kate Swinburne-Johnson, who are co-chairing the festival for the sixth and final time this year, say it is important to get young people interested in the environment and climate change.

Mrs Swinburne-Johnson said: “The idea of the festival is yo give young people an opportunity and a voice and while they are performing and taking part they can give their input into what is a very big issue. The workshops mean that every child can get involved.”

The Create ‘n’ Make and Red Van Man craft workshops will return as will artist Emily Cooling, who will run a mixed media workshop. Illustrator and ceramicist Lily Rossiter will run a “dreamy puppet props” workshop. The Young Shakespeare Company will run workshops based on The Tempest, while Stageworks will hold a performing arts workshop with younger children.

The first main event is a gig night at Magoos in Hart Street on Saturday, March 7. This is open to DJs, bands, singers and solo performers in school years 9 to 13.

HYF Unplugged on Friday, March 13 will be held at the Kenton Theatre in New Street. This will be for classical, acoustic or folk singers and musicians who do not require a backing track and will incorporate the old HYF Proms. HYF Dance will take place at the theatre the next day but there will be no Young Dancer event this year.

HYF Variety will take place in the evening. Organisers say “anything goes” — storytelling, magic, comedy, singing, playing an instrument with a backing track, or showcasing a particular skill. On the final Saturday there will be a fun run at Henley Rugby Club, which is open to children from reception to year 11. Every runner will receive a medal sponsored by Higgs Group, publishers of the Henley Standard, while the primary school with the most entrants will get £250 worth of sports equipment and the secondary school with the greatest number will get £180 donated by the Physiolistic sports injury clinic, which is the organising sponsor, and Offur.

Prizes for the writing competition will be given out at the Bell Bookshop in Bell Street by author Amanda Jennings. An art and film exhibition will take place at the River & Rowing Museum across the closing weekend.