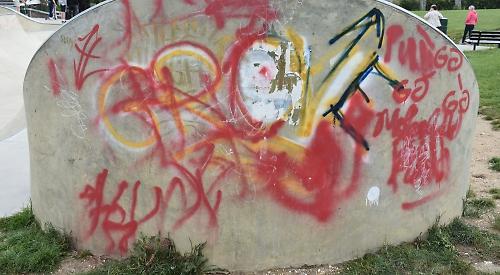 A PROPOSAL to install graffiti walls in Henley to deter antisocial behaviour has been branded “ghastly”.

Deputy Mayor David Eggleton came up with the idea of having a special board at all the town’s parks as a means of providing youngsters with a “legal” space to vent their frustrations.

It comes after a number of incidents at Makins recreation ground and at Freemans Meadow where new equipment was spray painted by vandals.

The town council estimates that its staff spend up to two hours a month in winter and up to eight hours in summer removing graffiti from its property.

Councillor Eggleton told a meeting of the town council’s open and green spaces sub-committee on Friday that graffiti boards had been installed elsewhere successfully. He said: “I would sooner not go down this route but sometimes you need something to stop this sort of thing.

“I have spoken to a couple of people from Woodley, where they used to have lots of graffiti, and they put boards in and around different places. They don’t look out of place.

“I think by putting these things in you are giving them a place to do it rather than now where they have done bins and all sorts of stuff over the town.

“If we can concentrate on one area, it is easier to paint over a board but when you have it on a bin it costs more and there’s the time to clean it off. It is about dealing with the problem in an amicable way.” Cllr Eggleton, who is chairman of Henley in Bloom, suggested having a board for a trial period and speaking to professional “taggers” or artists who could give a workshop to children.

But Councillor Will Hamilton said: “This will be ghastly. Wherever you put it, it will just cause problems with all kinds of different messages.”

A report by Karl Bishop, the council’s parks manager, and Becky Walker, the estates manager, said while the idea had some merit, they could not support it.

They said that having the boards could send the “wrong signal” that graffiti was allowed and provide a legitimate reason for people to carry spray paint.

The report also said the boards could also upset residents and visitors to the parks and there would always be people who thought graffiti was ugly and an “unwelcome eyesore”, even if it was permitted.

The idea was also opposed by the Thames Valley Police neighbourhood team and the Friends of Freemans Meadow, a residents’ group.

Mr Bishop told the sub-committee that Cllr Eggleton had his “heart in the right place” but added: “We don’t feel this is the way to go.”

Councillor Kellie Hinton, who chairs the sub-committee, said that recent incidents of graffiti were partly down to careless workmen leaving spray cans around so they were easily accessible to children.

She said: “We certainly have had a problem with graffiti and kids getting hold of spray cans.

“They didn’t buy spray cans with the intention of doing graffiti. Workmen left their tools around and kids will be kids.”

The sub-committee voted against the proposal.