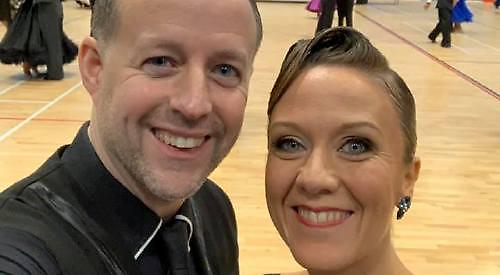 A DANCE teacher is celebrating after 31 of his students reached the final of a national competition.

Richard Miles, who runs the Miles School of Dancing at Henley town hall, entered them for a qualifying event, which took place in Fleet.

The Latin and ballroom dancers were awarded places at the Imperial Society of Teachers of Dancing’s grand final, which will take place at Blackpool Winter Gardens on October 31 and November 1.

The group also came away with 12 gold medals for the best performances in their sections.

Mr Miles, of Henley Road, Caversham, was partner to most of his students on the day and only one failed to progress.

He said: “I’m very happy, although it was pretty exhausting and I more or less went straight to bed afterwards.

“I’m very proud of how they did and I’ll be organising workshops to help them build their skills in the run-up to Blackpool. The students are very excited and are already ordering their outfits.”

Last year, Mrs Miles won a silver and a bronze trophy at Blackpool after taking part for the first time in four years.