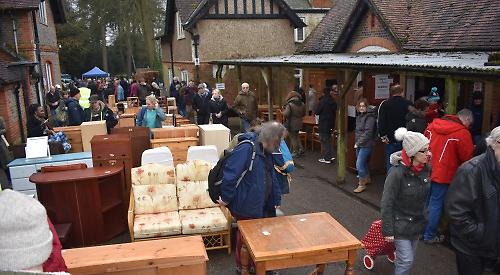 VOLUNTEERS who help to run Sue Ryder’s second-hand sales have continued to express concern about its decision to scrap them when the Nettlebed hospice closes.

The charity says it sought a new venue for the events, which take place every three weeks and raise about £500,000 annually, but couldn’t find one.

It says any leftover items will be shared among its shops including the one in Duke Street, Henley.

But the helpers, some of whom have been collecting and sorting donations for decades, say they weren’t invited to suggest sites which they may have known about and they will miss socialising while helping a good cause.

Mrs Goodall says Lewis’s confidence and social skills have improved through helping and he is saddened by the end of the sales.

She said: “It has done him the world of good because it’s such a supportive environment.

“He’ll confidently say ‘hello, ladies’ when he arrives, which he never would have done years ago. It’s ideal for him and he’s gutted that it’s ending.”

Mrs Goodall began volunteering at Joyce Grove after being introduced by a friend who has since died.

She said: “I don’t know what I’m going to do. I’ve been doing it for so long that it will be a real loss, as it will to many of the team. We’ll have to keep in touch with each other.”

Sue Hedges, from Gallowstree Common, a volunteer since 2010, has written to the charity to complain.

She said: “The high-handed manner in which donors, volunteers and staff have been treated is appalling. If the donations at Nettlebed are to be taken by Sue Ryder shops, why are these displaying notices saying they’re full and can’t take more?

“Do you really think your loyal customers will to come to the final sales knowing no fresh stock is available? The gathering after the last one will certainly not be any sort of celebration.”

The sales, which have been running since the early Eighties, sell used goods including furniture, clothing, films and music, kitchenware, toys and electrical equipment.

A Sue Ryder spokeswoman said: "We have been searching for an alternative site from which to host the sales for well over a year.

"We put a significant amount of resource behind the search including drafting in assistance from our retail colleagues as they have experience in sourcing large areas such as warehouses and industrial units.

We are also disappointed that the sales are not something we will be able to carry forward and replicate once we have left the Joyce Grove site as the funds raised will be a huge loss to the charity and we recognise the social opportunities the sales provided for all of our wonderful volunteers.

However, as well as needing a very large area in order to host the sales, we also needed somewhere which provided the necessary space for parking, donation stations and sorting areas.

"We also needed to consider the financial implications of leasing such a space as well as the insurance and number of staff needed in order to manage a new premises under current health and safety legislation.

"Sue Ryder remains reliant on the generous and vital support from the South Oxfordshire community as the charity will continue to provide the expert and compassionate palliative care we are so well known for in South Oxfordshire."

The charity has several other fundraising activities coming up including its Southern Women of Achievement Awards, which will take place at Phyllis Court Club in Henley on March 13, as well as the Reading half-marathon on April 5.

The final sales will take place between 10am and 12pm next Saturday and on March 7 and 28.