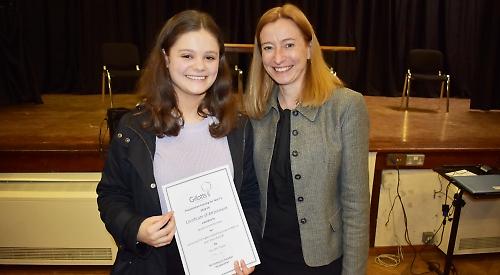 MORE than 30 former pupils of Gillotts School in Henley returned for an awards ceremony.

They were invited back to celebrate their success in their GCSE exams last summer and were joined by members of their families.

The teenagers were invited on to the stage in the school hall in groups to receive certificates for academic achievement and effort.

The certificates were presented by headteacher Catharine Darnton and former pupil Christie Jones, who now works for heart muscle charity Cardiomyopathy UK and was the evening’s speaker.

Ms Darnton explained how the pupils’ results had put Gillotts in the top 10 per cent of schools nationally in terms of progress.

She said: “Right now I couldn’t be more grateful to each and every one of you for what you did.

“You were a fabulous year group and we enjoyed having you. The work you put in was phenomenal.

“It’s lovely to be able to say well done and congratulations for all you achieved at Gillotts.”

Mr Jones, of New Street, Henley, who was at the school from 1998 to 2003, advised the teenagers to take their time finding the right job, explaining how he spent years in finance because he was good at it but hadn’t enjoyed it.

He said: “You work a long time. Make sure it’s something you enjoy and are passionate about it.

She achieved a grade 9, the highest grade, in 10 of her GCSE exams.

Lulu said: “It’s really, really nice to get the award because I feel I put in a crazy amount of work.

“Coming back is a really nice way to round it all off. It’s very kind of the school to do this evening and bring everyone back together.

“It’s great to see everyone happy and to see the teachers again. I would not be in the position I am today without Gillotts.

“I just had the best time here and couldn’t be more thankful for how much it did for me. Everyone was so supportive and all the teaching was so good.”

Lauren, from Emmer Green, is now studying A-level history, English literature and chemistry at the Piggott School in Wargrave.

Her award incorporated her achievements in music as part of the choir and as a pianist.

Lauren said: “I’m very grateful and feel honoured to have been awarded.

“Creative arts have quite a close place to my heart and the music and dance here is incredible.”

Eleanor Whittle, 16, from Rotherfield Greys, was recognised for achieving the highest results in her year group in art and design and for her “exceptional” work ethic.

Eleanor said: “It was good to be back. It was a lovely reminder of a journey I have come through.

“It was fun seeing a lot of friends I haven’t seen since leaving. It was a really nice reminder of such a wonderful environment.” Georgia Hunter, 16, from Henley, received a certificate for going from grade 5 to grade 9 in geography.

She is now studying A-level maths, biology and economics at the Piggott School in Wargrave.

Georgia said: “When I opened my certificate on results day I was very surprised. I did use a few cuss words. They were good ones though — out of joy!

“It’s quite nostalgic being back.”

After the ceremony, Ms Darnton said: “It’s fantastic to have them back. They were such a lovely bunch of individuals and we really enjoyed working with them.

“They produced pretty much the best GCSE results we have ever had but we talk to children about being the best they can be — it’s not just about getting grade 9s.

“We were also recognising the students whose hard work and dedication and the way they worked with their teachers allowed them to achieve more than we might have expected at the start of the journey.

“The most important thing for us is that each one leaves feeling they made the most of their opportunities.”