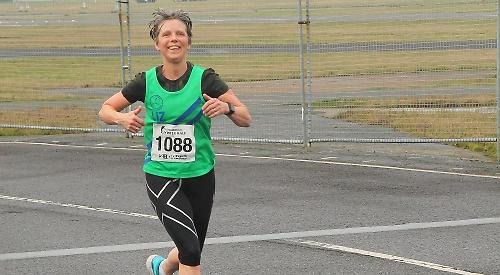 A WOMAN from Henley has been chosen to run for her country — at the age of 59.

Liz Jones, of St Mark’s Road, qualified in the England Age Group Masters competition after finishing second in her age group at the Farnborough winter half marathon.

She will make her national debut at the Fleet half marathon on Sunday, March 15 against Celtic.

Her teammates will include BBC presenter Sophie Raworth, who finished second in her age group at Farnborough.

“It’s a privilege to run for your country. I was hopeless at sport and things like that at school so it’s nice to enjoy it now.”

She was representing Reading Roadrunners at Farnborough and finished in one hour, 40 minutes and 26 seconds, more than four-and-a-half minutes faster than the qualifying time.

She was beaten only by the Bracknell Forest runner Maureen Dowling, who is already a masters international.

Mrs Jones, who has been running for the last 20 years, said: “The first four of the age group qualify and last year I was fifth so I thought ‘okay, I’m coming back to sort that out’. “If anybody says ‘how did it go?’ I say to them ‘I’m racing for England’ and they say ‘what, you?’ My family and friends were shocked and proud.”

The age group masters competition is for anyone aged over 35 and has several age categories.

Mrs Jones, who was in the 55 to 59 year group, said: “It’s only as I got older that I started to come quite high in the age group as people fell off the perch, I suppose.

“The half marathon is my favourite distance. I’m usually somewhere in the top five or 10 depending on the size of the event. I’ve just wanted to do the best I can without getting injured.

“It’s a total break from everything else and I love the countryside and being outdoors.”

So how does she rate her chances next month? “I’ve got to be realistic, I’m not going to come in the first three,” she said.

“If you look at times people have done in my age group in all three of the qualifying races, there are faster people than me. I don’t expect to get a place but wearing the England vest is the exciting part, especially at the age of 59.”

Mrs Jones, who is a member of Run Henley, has also run marathons in aid of Wyfold Riding for the Disabled.

She will be the sixth Reading Roadrunners veteran from the Henley area to be selected for England in the last six months.

Caroline Hoskins, from Henley, ran sub three hours in England colours in the Yorkshire Marathon in October in the 50 to 54 age group.

Alex Harris, 51, from Caversham, ran a personal best in his international debut at the same event while Jane Davies, of Goring, ran in the the 60 to 64 section, her second international.

Tracey Lasan, from Goring, ran for England in the 60 to 64 age group at the Maidenhead half marathon and Seb Briggs, from Emmer Green, ran in the 40 to 44 age group.