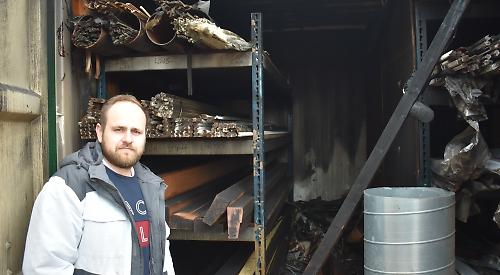 THE manager of a joinery business fears it was deliberately targeted in an arson attack.

Adam Gutteridge was speaking after a fire caused more than £50,000 of damage at Henley Joinery in Newtown Road.

The attack happened at about 11.30pm on Sunday but was not discovered until early the next day when staff arrived for work.

Two fire engines were called to tackle the fire at 6.30am and remained on the scene for about 90 minutes.

Mr Gutteridge, 31, was alerted by staff who arrived for work and found the damage, which included storage, a metal container and machinery at the back of the company’s two units.

The equipment included a £15,000 briquette machine that turns sawdust into pellets which are then burnt in a furnace to heat the units. It was only installed last month.

The storage, which comprised a scaffold grille wrapped in tarpaulin with a wooden roof, was gutted and the contents, which included sawdust and timber window frames, were destroyed. The metal container was damaged by smoke and the wood inside turned black.  The interior lighting was also affected and no longer works.

The damage is covered by the company’s insurance.

Mr Gutteridge said that the firm’s CCTV has captured a possible suspect but the image wasn’t clear.

He said: “We’ve reviewed our CCTV and a couple of other businesses have allowed us to look at theirs.

“It shows a young female in a yellow coat stumbling to the scene, going away from it and then coming back but not reappearing.”

On Monday afternoon the business installed a fire extinguisher near the briquette machine, which is accessible from the road.

But when staff returned to work on Tuesday morning they discovered it had been stolen.

Mr Gutteridge, who lives in Henley, said he was worried that someone was targeting the business and feared there could be more incidents.

“It’s a very bitter pill to swallow,” he said. “Now we’re coming into summer and the time isn’t there to start mucking about to get all this sorted.  Summer is our peak time. We’ll have to work more weekends.”

The business has been at its present site for about 18 months after moving from Farm Road, where it traded as FJ Williams for 30 years. It provides bespoke joinery and manufactures doors, windows, frames and staircases, among other goods.

Mr Gutteridge, who joined in 2008, said the loss of the briquette machine was annoying because the cost of heating the units would rise.

He said: “We’re trying to reduce heating costs, which are crazy for us because of our big units, and now we’ve got no way of getting rid of our waste [sawdust] without someone coming to collect it.

“It’s just frustrating because we had just installed the machine and it helped us cut costs. The insurance will cover most things but I don’t think we’ll get everything back.”

Mr Gutteridge was shocked when he was first told about the fire.

He said: “One of my joiners said ‘there’s been a fire and I think you should get down here’. My initial thought was maybe that it was some kind of electrical fault.”

Staff will now have to carry out repairs despite having already worked to make the site suitable for joinery.

Mr Gutteridge said he now planned to buy a new CCTV system with high definition cameras and motion sensors. He is also going to install a gate with barbed wire to prevent intruders from being able to access the site from the road again.

He must also find a new wooden roof for the storage grille, where the sawdust shavings are kept, and needs to install a new fence at the back of the premises.

Mr Gutteridge said: “I’m just hoping that nothing else happens. We don’t know if we are being victimised for something.

“It’s a little bit worrying but the worst thing is going to be the labour time putting it right.”

Police are appealing for witnesses. Anyone with information should call the Thames Valley Police non-emergency number on 101.