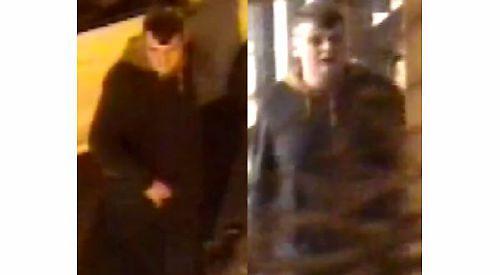 A GROUP of about 20 people were involved in a brawl outside a Henley nightspot.

The fight took place outside Magoos bar in Hart Street between 12.50am and 1.15am on Saturday.

It is believed a number of people were assaulted and received minor injuries that did not require hospital treatment.

Some of the group left the scene and got into a red Mazda RX8 vehicle that was parked in the Waitrose car park, off King’s Road.

They then drove on to Bell Street, mounting the pavement and driving towards pedestrians, before leaving at speed in the direction of Nettlebed. No-one was injured by the vehicle.

Others from the group were seen getting into a grey VW Golf.

Thames Valley Police is appealing for information and has released CCTV images of some of the people involved in the hope that someone can identify them.

Investigating officer PC Ruan Brink, based at Abingdon police station, said: “This is a serious incident that could have caused significant harm.

“I am appealing for any witnesses, or anyone who may have information about this incident, to please come forward.

“In particular, I believe that some of the offenders got into a grey VW Golf, partial registration plate NA13.”

Anyone with information can contact the police non-emergency number 101, quoting reference 43200077723.