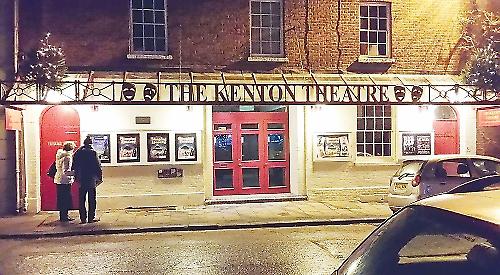 HENLEY is feeling the effects as the coronavirus tightens its grip on the UK.

Venues including the River & Rowing Museum, the Kenton Theatre and the Regal Picturehouse have all closed, sporting fixtures have been cancelled and retailers have reported a huge drop in footfall.

Dozens of events that were due to take place over the next few weeks have also been postponed or cancelled in an attempt to minimise the risk of infection.

The country’s death toll from the pandemic stands at 104 and more than 2,626 people have tested positive for the virus, including 25 in Oxfordshire, but the actual number of cases is estimated to be as high as 55,000.

Schools shut today (Friday) until further notice except for children of key workers and the most vulnerable.

Panic buying has continued, despite pleas from supermarkets, with many store shelves bare of long-life goods and hygiene products. Prime Minister Boris Johnson has advised that everyone in the UK should avoid “non-essential” travel and contact with others. He said people should work from home and avoid large gatherings.

Those most at-risk are pregnant women, people over the age of 70 and those with certain health conditions and they will be asked to stay home for 12 weeks.

The River & Rowing Museum in Mill Meadows closed on Tuesday until further notice as a “precautionary measure”. Museum director Dr Sarah Posey said: “Our number one priority is the safety of our staff, volunteers and visitors at this very difficult time. We hope that in time, and respecting Public Health England advice, we will be able to re-open again soon.”

The Regal Picturehouse in Boroma Way closed on Wednesday, along with 24 sister cinemas across the country, until further notice. In a statement, the company said: “We deeply value our cinema-loving audience and staff and their health and wellbeing is our number one priority during this difficult time. We look forward to welcoming our Picturehouse customers back through our doors as soon as possible.”

Customers who booked tickets online or on the phone would be automatically issued a refund within 14 days.

On Monday the Kenton Theatre in New Street cancelled all its shows until the end of April and the Mill at Sonning theatre closed.

Christopher Tapp, the Kenton’s chairman of trustees, said: “As nothing is more important than the health and safety of our community, we believe this is the right decision. We are in contact with the cancelled shows with a view to rescheduling some of them and in that event such tickets would be valid. This situation is potentially financially devastating for the theatre, which is a registered charity primarily relying on ticket sales for its income.

“In the light of this, we are asking our loyal patrons who already have tickets for upcoming shows if they would please consider donating the cost of these tickets to the theatre. We would be extremely grateful if you decide to do so.

“We hope to return to normal business as soon as possible.”

Sally Hughes, managing director and artistic director of The Mill, said: “These are extraordinary times. I think the majority of our customers are scared about coming — it’s such a serious situation. Everybody is affected.

“We’re postponing all performances for the next few weeks. We’re taking it week by week. The next stage is re-planning where we’re going to put productions.

“Our customers are being amazing and I would like to thank them in the paper. We just don’t know how long this is going to go on for — it’s just tragic.”

The theatre urged customers not to call the box office but wait to be contacted by the venue, saying it had been “inundated” with phone calls. The show Two Into One is currently still due to start its run on June 18.

Leander Club said it had closed to members and guests until further notice. General manager Paul Budd said the office would remain staffed and it was hoped the athletes would be able to continue training from the club.

Henley Town Council said all non-essential council and committee meetings had been cancelled and the information centre at the town hall was closed to walk-in appointments until further notice. However, services will still be provided by telephone and email.

The Mayor’s civic dinner next Saturday (March 28) and town medal awards ceremony have been postponed and the VE Day celebration on May 8 has been cancelled.

The council will be offering its facilities free of charge to the emergency services, charities and other groups.

The charter market will still operate every Thursday, although there will be fewer traders. Parks and playgrounds will remain open.

The Henley spring clean, which was due to take place next Saturday (March 28), has been postponed until September.

Town clerk Sheridan Jacklin-Edward, said: “It is with deep regret that we have decided to cancel upcoming events and close our information centre but we believe this is in the best interest of the public, staff, and councillors.

“We will still keep as many of council facilities and services running as possible and will continue to review as the crisis develops.”

Sue Ryder says it can’t allow any visitors to its hospices without “express permission”.

All activities and events taking place at hospices and neurological centres have been cancelled.

Fundraising events have either been cancelled or postponed. This includes the last ever sale at the Nettlebed hospice, which was due to take place next Saturday.

The fourth biennial Gap Festival in Goring, which was due to take place between June 12 and 21, has been cancelled.

Trustees made the decision at a meeting conducted via a video link to avoid meeting face to face.

The full line-up for the 30 events, including a headline performance by singer Judie Tzuke, was due to be announced this week.

Ron Bridle, a member of the board, said: “There’s a lot of uncertainty surrounding the next few months so it didn’t make sense to even postpone the festival for a short while.

“That would have been a lot of work with no guarantee that things would have improved or that people would still have the appetite for it.

“We’re all very sad because we have a fantastic, hard-working team who’ve put a lot of hours over the past year or so into getting us to this point.

“There’s still a lot of mopping up ahead of us and that will be almost as much work as it would if the festival was still on. We’ve got days and days ahead of calling people to let them know what’s happening.

“The deposits had been paid and contracts signed with the artists, which we will be honouring, although some have been very reasonable and are trying to help us.

“It’s a shame that it has come to this but we had no alternative and are still hopeful that we can regroup and resurrect the same programme or something very similar.

“That will likely be next year but we can’t say anything for certain at this stage.” The sporting calendar has been all but wiped out because of the virus.

The RFU has suspended all rugby activity in England until April 14, which affects the next three Henley Hawks’ matches.

Chris Baker, president of Henley Hockey Club, said all hockey had been suspended and it had postponed its end of season dinner dance on April 5 until July 24. He said: “Fortunately, our season was due to end this Saturday anyway in terms of league hockey.

“The other hockey will just stop until we start training in August. If ever there was a good time for us not to be playing anything it’s just now.”

Trevor Howell, chairman of AFC Henley, said that all club matches, training and extra-curricular coaching sessions had been suspended until further notice.

He added: “We will, of course, keep the situation under constant review, subject to government and Football Association advice, and act accordingly.

“We are naturally extremely disappointed about this and can only hope that these measures are in place for a limited period only.”

Paul Trimmings, manager of Henley Town FC, said: “It’s financially crippling for us to be honest. We could go bust over this.”

British Rowing restricted any external visitors, including the media, to Caversham Lakes for the final Olympics trials at the weekend.

A spokeswoman said: “This is a particularly crucial time for the athletes with Olympic and Paralympic seat selection on the line. These trials form an essential part of selection.

“We have taken the decision to prevent any external visitors to Caversham during this time to minimise the risk of infection.”

He said: “You’d expect the regatta to be taking all options very seriously but we’re still in March and the regatta is at the beginning of July.

“We continue to heed the advice released by government. We are continuing to plan as normal at the moment but the situation is evolving very quickly.”

The Reading Half Marathon, which was due to be held on April 5, has also been postponed and the Henley Parkrun has been suspended until at least the end of March. The Henley College’s production of Equus, which was due to take place this week, was cancelled.

The Henley & District Agricultural Association cancelled its annual meeting, which was due to be held on Monday.

Peppard Parish Council has cancelled its annual meeting in April.

Chiltern Edge Horticultural Society has cancelled its spring show, which was due to be held at Sonning Common village hall the same day.

The second Greener Henley festival, which was due to take place on May 16 in Market Place, has been postponed until September 5.

A litter-pick in Charvil on March 29 has been postponed until September.

The Fish volunteer Centre in Sonning Common has cancelled all its bus trips for the foreseeable future.

Any client who needs help with shopping or other support should call the FISH office on 01188 972 3986 to ask for assistance.

Springbox Gymnastics Club has shut all classes until further notice due to government advice.

Other postponed events include Henley Players’ production of the The Vicar of Dibley, which is likely to move to October this year or May 2021.

Reading Buses, which runs the Henley bus services (151, 152 and 153), is running a reduced Saturday timetable during the week.

Most of South Oxfordshire District Council’s services including bin collections are running as normal.

Staff are still on hand to answer queries about issues such as council tax, planning and housing and its business team is offering advice to traders who fear the outbreak will affect trade.

For a full list of cancelled or postponed events, visit
www.henleystandard.co.uk