Children thrilled by the hill at fetsival fun run 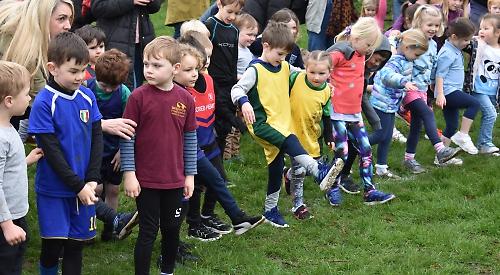 The youngsters, who were all representing local primary schools, enjoyed a warm-up led by personal trainer Benson James and his team before the races in Borlase Field, next to Henley Rugby Club, on Saturday.

They ran distances between 0.5km and 2.5km, depending on their ages, and were led by pacesetter Toby Garbett.

Chris Benaar, whose daughter Allegra, six, took part, said: “I think it’s such a brilliant event that encourages them to get outside and get some fresh air.”

Rob Friend, whose daughter Matilda took part, said: “It’s good to get outdoors and for them to have a run around and see that sport’s important and to do it with their friends and have fun.”

Ben Watson, whose daughter Jemima attends Rupert House in Henley, added: “It’s a good community event and at times like these it’s good to get the whole community together.”

“I liked the hill,” added Charlie.

Ed Morris, whose son Harry attends Badgemore Primary School in Henley, said: “I’m an athletics coach and we have been helping out Badgemore children with training.

“This is a good event for people to come and have some fun.”

He said: “She said how great it would be to see a high percentage taking part in the race. We did training on Mondays, Wednesdays and Fridays and we had 25 per cent of the school turn out for the competition. I’m so proud to see everyone running.”

Isla added: “Last year there were only a couple of people doing it. It’s nice to see everyone having fun, enjoying themselves and participating. The training has really paid off.”

Every child received a medal as they crossed the finish line from Deputy Mayor David Eggleton, who also presented the trophies and certificates at the prizegiving ceremony later on.

Rather than shaking hands with the youngsters, he touched elbows with them due to the coronavirus outbreak.

The event was organised in partnership with physiotherapy and sports injury clinic Physiolistic, which is based at the rugby club. Business director Clint Botha said: “It went really well. I think everyone had a fantastic time, both the children and parents, and everyone was pretty enthusiastic.

“We were closely monitoring the Government’s advice as to whether or not to go ahead with the event and at the time it still seemed fine to do so and it worked out really well.

“Part of our ethic is to promote physical activity and wellbeing and that helps with mental and emotional wellbeing.”

Mr Botha thanked the rugby club and the Borlase family for allowing the use of their land as well as the volunteers who gave up their time to help.

The schools with the most entries were Trinity and Gillotts.

• Due to coronavirus outbreak, reports and pictures from other Henleu Youth Festival events have been held over until next week.