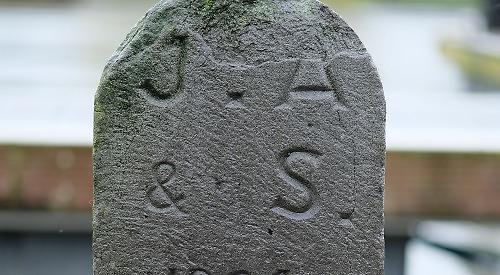 A NUMBER of readers have responded to my Hidden Henley item two weeks ago about the marker by the river in Thames Side which is engraved with “J A & S 1924”.

This as prompted by reader Bob Thomas who wondered whether it was perhaps a memorial.

I said the concrete (not stone) marker had featured in Hidden Henley twice previously in 2008 and 2016 but with no response. Not this time.

Ken Arlett, the current Mayor of Henley, says: “Let me help you. My granddad was John Arthur Arlett and he had a boat business operating from where the wee concrete post is.

“All his boys worked for him — they used to make all different types of boats, skiffs, punts, motor boats, you name it. So ‘JA & S’ was, yes, John Arlett & Sons.”

He also reminds me that there was a picture of the five brothers published in the Henley Standard of June 30, 2017 standing just to the right of the post out of sight. In the background was the old Carpenter’s Arms, now the site of the Henley Royal Regatta headquarters.

Ken says: “Harry had a son John, then one of John’s sons was Alun, next Harry junior. John, Harry’s son, was my cousin.”

I am also indebted to Andrew Hawkins, of Berkshire Road, Henley, who also knew what the marker stood for.

He says: “My mother talked about the Arlett boys, whom she knew before the war.” Sandra Moon also got in touch to say she has a sign on her wall at home with “J A & S”.

She says: “I back on to what was once Parrot’s boatyard and I was always told it stood for Arlett & Sons, who were boatbuilders that owned it and presumably the waterfront as well prior to the
Parrots.”

Anne Taylor also got in touch to remind us of the previous article.

My thanks to all of you.

Meanwhile, Bob (who first posed the question) was delighted to learn of the maker’s history and suggested headlining this item “Henley revealed”.