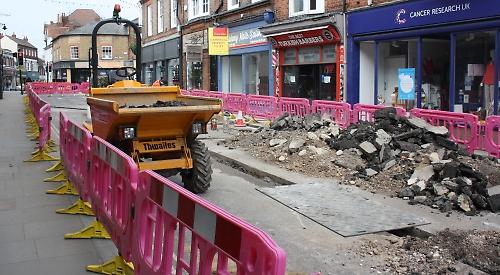 THE installation of new high-speed internet cables in the centre of Henley has been brought forward while shops are shut due to the coronavirus outbreak.

Zzoomm’s contractors were set to dig up Duke Street and the southern half of Bell Street from May 11 to 29 as the company rolls out its network across the town.

When this was announced two months ago, businesses complained that road closures would hurt their trade at one of the busiest times of year.

The firm promised it would work quickly and keep pedestrian access open and also shortened the closure period, which was originally going to run until June 8.

But it wasn’t allowed to bring it forward because Oxfordshire County Council, the highways authority, requires utility firms to give 12 weeks’ notice of road closures.

Now, however, the council has granted permission because most shops are shut as they are “non-essential” businesses.

On Monday last week, the workmen fenced off Duke Street with pink plastic barriers and dug a channel down the centre of the road to lay cable from a reel. They have put up signs at all sites explaining that their teams are classed as key workers by the Government so can continue working and are following hygiene precautions, including disinfecting their equipment.

The company says the entire roll-out is at least two weeks ahead of schedule so should be completed by the middle of July.

A spokesman said: “As always, the citizens of Henley are the main priority for Zzoomm.”

Meanwile, a shopkeeper says her life was made a misery by the work being carried out in her street.

Joan Bland owns Asquiths Teddy Bear Shop on the corner of New Street and Bell Street and lives above with her husband, Ian Wainwright.

Mrs Bland, a former town councillor, is asthmatic and both she and Mr Wainwright are in their seventies and isolating. She said: “We were seriously suffering from the works. They were using all this heavy machinery and it was just horrific. It was causing the building to shake.

“When I heard they would be doing work here, I didn’t think it would be this horror show. The road was closed so we had no deliveries of food either.”

Due to the lockdown measures the couple were unable to go outside and raise their concerns with the workers.

Mrs Bland, who uses an inhaler, added: “I was in a back bedroom upstairs and could hardly breathe because of the dust. Dust was getting into every orifice of the building, even with the windows shut. We don’t have double glazing because of it being a listed building so the dust was coming through all the gaps. The whole building was full of it.”

Asquiths has been closed since the Government ordered all non-essential business to stop trading. All the bears, apart for a small selection displayed in the window, were put into bags to protect them. A Zzoomm spokesman said: “We do know there have been instances of dust, noise and some shaking caused by the groundworks.

“With listed buildings such as these, we do take extra care and in some instances, dig by hand to limit the impact of the work on the foundations.

“Our teams are trained to minimise impact and take all safety precautions to complete this build as fast as possible and with as little impact as possible.

“Our team also meets with residents and retailers frequently to reassess our plans and adapt how we develop this network, taking individual circumstances into account. With the current dry weather and the type of road work required, there will be some dust and noise created.

“We do apologise for the inconvenience caused to the retail owner. We have now completed the one-way section of Bell Street and have moved on to the two-way section. This will mean that there will be no further impact on Asquiths and other retail outlets once this period of disruption has finished.”