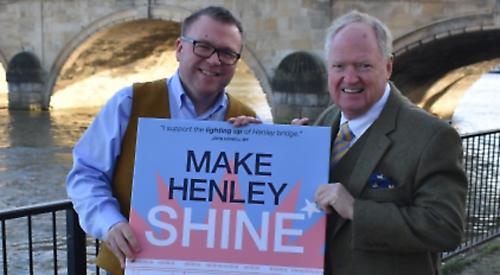 PLANS to light up Henley Bridge have suffered another setback.

Entrepreneur Clive Hemsley has been trying to find a permanent way of attaching lights to the Grade I listed structure.

With the help of friend and Henley jeweller David Rodger-Sharp, a planning application for LED lights was submitted to Wokingham Borough Council and South Oxfordshire District Council in February.

The two authorities share governance for the site and this was the second attempt to go through the planning process.

However, Wokingham has rejected the application again due to concerns about the potential harm to the 18th century bridge, which is owned by Oxfordshire County Council.

It says: “The proposal includes insufficient information to properly assess the potential harm to the significance of designated heritage assets. There is no clear and convincing justification for any potential harm and it is not clear that the proposal would conserve or enhance the character and special architectural interest of the Grade I listed bridge and surrounding conservation area.”

The district council was supposed to have made a final decision by April 7 but has instead recommended a holding objection “subject to receipt of further information.”

It also says the application has an “absence of any positive information in respect of the impacts” that any new modern fixings would have on the bridge.

The council said: “The submitted heritage appraisal and impact assessment does not consider these aspects in a meaningful way that could be considered to be proportionate to the very high importance of the Grade I listed bridge.

“Henley Bridge forms part of the architecture of a market town within a rural setting and does not share the urban connotations of London.

“The bridge itself is a polite form of architecture and it is unclear how the very modern LED lights can enhance or be consistent with its architectural and historic character.”

Mr Hemsley, of Hart Street, attached strings of fairy lights to the bridge without permission in March 2018.

More than 2,400 people signed a petition calling for the lights to stay, but heritage groups and residents opposed.

During the consultation for the latest application, the district council said: “The previous method of glueing the lighting to the stone as a means of avoiding mechanical fixings was not acceptable.

“A secondary concern is the impact that any new fixings would have longer term by opening the joints and by means of weathering which may exacerbate the decay of the stonework.”

Last year, Mr Hemsley had a similar application turned down by the borough council, which said that drilling into the mortar surrounding the five arches of the bridge posed “potential harm” to the stonework.

It also said there was no evidence that the lights would conserve or enhance the bridge’s architectural value.

The application was modified to include a type of adhesive fixing, which the applicant said would not cause any damage. The lights would be attached with cable ties every metre and fastened with the silicone compound.

The concerns of Wokingham Borough Council were shared by a number of other organisations, including Historic England.

Rachel Fletcher, inspector of historic buildings and areas, said: There is no justification for this. There is no need to light the bridge and there are other methods of doing it, such as using a wash of light from spotlights mounted on the bank.”

Mr Hemsley and Mr Rodger-Sharp said they wanted to light up Henley Bridge to boost trade and tourism in the town.

The white lights would be controlled privately and could change colour for high-profile events, such as Henley Royal Regatta and the Thames Traditional Boat Festival.

Mr Hemsley described the lastest decision as “frustrating” and would not confirm whether he would resubmit the application.

He said: “Both councils were invited to two meetings. One which we arranged with the architects and with the London bridge community and the other with myself and David just before the lockdown and they did not turn up.

“We had the lights that we were proposing as a strip to show how it wouldn’t damage the bridge. It really is frustrating because you go to all that effort and none of them even bothered to apologise. David did a detailed diagram on how the lights would be fixed.”

Mr Rodger-Sharp said: “We are not only disappointed that Wokingham have refused permission but surprised that they have been able to come to this conclusion.

“The local authority should have requested further information if they thought there was insufficient information to be able to assess. There are sufficient grounds to appeal.”

He added: “Gavin Jackson, a local architect with over 35 years’ experience, is now consulting on the project, so we haven’t given up yet.”

Henley Town Council’s planning committee had recommended that the lights were approved but the Henley Archaeological & Historical group was against the plan.

Chairman John Whiting said: “A many coloured bridge lighting scheme might do well in places of highly-lit towns, such as Blackpool or London, but Henley has a quite different character. Saying that Henley needs bridge illuminations because London has them is simply fatuous and irrelevant.”