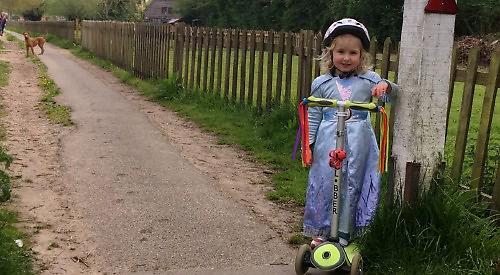 A YOUNG girl from Henley has raised more than £1,000 for the NHS’s coronavirus appeal by taking part in a 5km sponsored scooter ride.

Fifi Ackerley, three, completed the challenge with her mother Hayley on Sunday.

The pair set off from their home in Niagara Road and headed along Reading Road, Station Road and Riverside before crossing Henley Bridge.

They then followed the Thames towpath past Leander Club, Lion Meadow and Upper Thames Rowing Club before turning around near the Copas Partnership land at Remenham.

On the way back Fifi started getting tired so they kept their spirits up by singing songs from her favourite film, Frozen 2 and when they got home, she was rewarded with a “rainbow cone” ice lolly.

Mrs Ackerley recorded their adventure on a sports tracking app so that supporters could follow their progress. They ended up covering a total of 5.48km in an hour and 20 minutes.

Fifi, who lives with her mother, father Jim and sister Ruby, one, came up with the idea after hearing how her uncle Loic Ditchburn is producing plastic face shields for NHS staff at home using a 3D printer.

Mr Ditchburn, from Hambleden, is a mechanic for Ferrari and has been furloughed so wanted to make the best use of his time.

Mrs Ackerley said: “Fifi said she wanted to do something to help the doctors and nurses who are looking after all the poorly people and was also inspired by watching Captain Tom Moore’s sponsored walk on television.

“She enjoys riding around on her scooter so it seemed like the perfect way to go about it and I picked a distance which I knew she would find a bit of a challenge but wouldn’t struggle to finish. She found it was fine and actually did really well for her age — it’s a long way to go when you’re so small. There were bits where we dawdled and stopped to pick some flowers.

“It was hard for her to stay motivated in the final leg home so we did lots of singing to keep her going. I explained how proud she’d feel to finish it and afterwards she said she did.

“I’m not sure she entirely understands the distance she covered or the amount she raised but she felt really happy and she knows she has helped those who are helping others.

“Jim and I are very proud of her and amazed at the response as we thought even the target of £500 might be overly ambitious, so to get more than double that in a day of setting up the page was a real surprise.”

Proceeds will go to NHS Charities Together to support trusts and hospitals across Britain. To donate, visit www.justgiving.
com/fundraising/fifisscoot