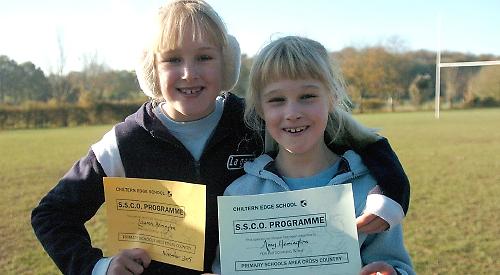 A YOUNG athlete from Henley is living up to her potential after going to America to train.

Amy Herrington, who throws the hammer, has won national competitions on both sides of the Atlantic and set new personal bests since she accepted a sports scholarship to North Dakota State University.

The 21-year-old was placed fourth overall in last year’s UK senior women’s rankings and claimed the top spot at the England athletics under-23 championships in Bedford when she came home for the summer.

She won with a throw of 62.47m, then qualified for the Manchester International Match in which she faced athletes from Scotland, Wales and Northern Ireland and came fourth.

This year’s American season, which runs from March to June, has been cancelled due to the coronavirus outbreak but Amy showed promise during training.

She scored an unofficial personal best of almost 66m at an intra-school contest in October, eclipsing her official record of 63.69m which she achieved at a fixture in Texas a few months earlier.

The latter is recognised as the 15th furthest throw of all time within British Athletics’ rankings.

Amy has also started throwing the weight, which is similar to the hammer but heavier, and came runner-up with a personal best of 20.12m at an indoor league match in February. This placed her fourth among her university’s all-time records.

She and her sister Lauren, 23, who grew up in Damer Gardens with their parents Paul and Jane, were very active children and took part in several after-school sports clubs at Trinity Primary School.

They were encouraged by their parents, who are both keen runners, while Mr Herrington, who is watch manager at Henley fire station in West Street, lifts weights recreationally and competed in his youth for Henley Boys’ Football Club and Henley Rowing Club.

The girls’ teachers advised them to join Reading Athletics Club, which they did when Amy was nine. Lauren went on to run the 800m at county level and now rows for Brunel University in London, where she studies sport and health science.

Amy initially threw the discus and shot put but took up throwing when she was 14 and a year later moved to Windsor, Slough and Eton Athletics Club.

The “hammer” is a metal ball attached by a steel wire to a hand grip. It weighs 4kg for women and 7.3kg for men.

Throwers first twirl the device while standing still, then rapidly rotate their bodies on the spot to build up momentum and hurl it on to a field marked with distance lines.

Amy stuck with discus at first but as she improved with the hammer, it became clear this was her main talent.

Aged 16 and in her final year at Gillotts School, she was runner-up in the under-17 throw at the English Schools championships.

This was her second entry and a significant improvement on the first, when she was placed eighth, for which she credits her former coach Paul Dickenson, a retired GB Olympic thrower.

Amy says: “The English Schools competition is the biggest in the calendar and you have to qualify through the area and county events so it was a very rewarding result.

“Obviously I was disappointed not to get the gold but coming second is still a big achievement. I had lots of support from my family, who’ve always been very encouraging.”

She did win gold at that year’s UK School Games in Manchester as well as playing for her school’s netball, rounders, hockey and athletics teams. She continued competing while studying for her A-levels, including physical education, at The Henley College, and decided to pursue the sport further.

Some older teammates from Windsor had gone to American universities so she decided to follow suit.

She applied in March 2016 to North Dakota’s throwing coach Justin St Clair and head coach Stevie Keller, who asked her to submit video footage of her in action, and was accepted.

She flew out the following January to start her course and train with the university track team.

Unlike at British universities, she studied a general curriculum for the first two years before majoring in exercise science as she hopes to pursue a career in fitness.

Her degree usually takes four years but sports scholars are allowed five because of their additional commitments.

Amy says: “The hammer took some getting used to and at first I just did it in the background while focusing on my other sports but in the end it became the main one.

“I didn’t give much thought to university when I was at school but I kept getting good results while I was at college and realised I wanted to do this seriously.

“I wanted to improve as much as possible and thought going to the States was a smart idea because the coaches and facilities are far better than in England.

“It was also a good opportunity to travel, which I love. You go all over the States to compete at different events and that sounded really cool.

“I was really excited to get in but there were mixed emotions as I realised this was actually happening and that I’d be living away from my family in a different country.”

She can only go home twice a year, once at Christmas and again in the summer.

Her first challenge was adjusting to the cold as North Dakota is on the Canadian border and temperatures drop well below freezing during the winter.

She also had to balance a longer training regime, which comprised twice-daily throwing and four weightlifting sessions a week, with academic demands. During her first two months, her personal best increased from about 54m to more than 59m.

Amy says: “The early weeks were tough because in North Dakota it can be -20C on a good day and there was so much snow, which was a real shock to the system.

“My training volume increased a lot, which took some getting used to, but it was a really good experience and I’m glad I went for it.

“It was hard to balance with studies but I adapted pretty quickly, as you have to. It’s a case of managing your time and staying on top of your homework.

“I still talk to my family every day because I like to know what’s going on back home.”

In her first season, she came 24th out of 48 athletes who took part in a competition for universities across the western half of the States.

Last year’s season was her most consistent because as well as setting a new personal best, she didn’t have a single throw below 60m.

She won the first national meet at Arizona in March with a distance of 62.92m then the following month she won the Drake Relays, another national event in Iowa.

Amy said: “I didn’t actually throw very far at the relays. I managed 60.06m so it was among my worst performances but I won because everyone else did even worse.”

She has also enjoyed mastering the weight throw, which she never tried in England. It is similar to the hammer but has a shorter cable and weighs more than 9kg.

Amy says: “It’s disappointing that our outdoor season has been cancelled but the governing body has extended our eligibility to compete so we won’t lose out in the end.”

At 5ft 6in and 150lbs, she is one of the shortest and lightest members of her team.

She says: “I’ve gained so much strength since I came to the States. Pretty much every girl on the team is over 6ft so I’m potentially at a huge disadvantage.

“However, it’s not just about strength — it’s also about good technique and I’ve had a lot of help with that, which has made a massive difference.”

Miss Herrington will graduate in December next year and then hopes to throw for her country at the European championships.

She says: “It’s all going so fast but I’m trying hard to achieve as much as I can while I’m here. When I was younger, it was always at the back of my mind that I could do well but I didn’t imagine I’d ever be throwing in the high 60 metres. Anyone who’s thinking of doing the same as me should just go for it.”

Mr Herrington, who now coaches the 200m and 400m for Reading AC, said: “I teach sport more than I take part so the girls might get their enthusiasm from me but certainly not their ability.

“Amy has worked incredibly hard. She’s quite small but she’s one of the strongest on her team relative to the size of the weights she’s throwing.

“She’s had to get used to a different lifestyle but it’s a great experience for her and we’re all very proud.”