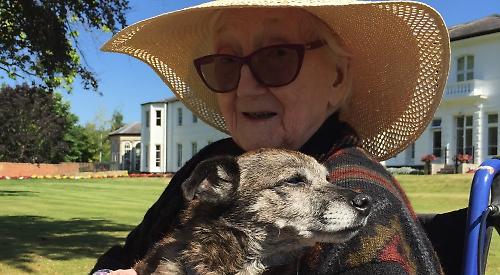 HENLEY lost a most remarkable lady with the death of Kathleen Hurley MBE at the age of 101.

Kathleen “Kay” Hurley passed away peacefully at the Thamesfield nursing home, off Wargrave Road, where she had been resident for the past five years since moving there from her long-term home in Henley.

She was made an MBE for services to education in 1981, the year after her retirement as headteacher of the Berkshire Hospital and Home Teaching Service.

This was a post unlike many other headteachers might expect to experience. Each year, Mrs Hurley oversaw the educational needs of about 2,000 children who, due to sickness or other situations, could not attend mainstream schools.

While some were taught in hospital settings, for others, programmes were devised so that they could learn at home. Special units were also set up for withdrawn children and those suffering with severe depression or suicidal tendencies as well as those who had been expelled from regular schools.

Mrs Hurley had 40 specially trained part-time staff helping to run the service, which cost about £1million in 1981, a figure that the council of the time thought very well spent.

She had moved into this field of teaching early in her career after becoming involved with education outside formal school settings while lecturing in America on an exchange visit in 1948.

She also spent some time in Australia, her husband’s home country, where she was responsible for setting up and running a service to help immigrant children, including Greeks, Italians and Chinese, to overcome their learning difficulties. Later, she also worked with deprived children in Notting Hill and Putney.

Mrs Hurley was a long-time and very active resident of Henley and was very supportive of the town’s twinning movements as secretary of the Henley-Falaise Association and a member of the Henley-Leichlingen Association.

She was also a major benefactor of the Royal National Lifeboat Institution and a patron of the Henley Festival.

In retirement, she was well known at both the Danesfield House spa and Phyllis Court Club.

Her funeral will be a very private affair, in keeping with her wishes and the current movement restrictions. She truly was a most remarkable lady.