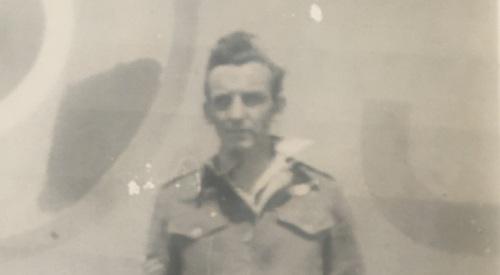 WITH the country gripped by coronavirus, remembering loved ones was an integral part of this year’s VE Day celebrations.

Elizabeth Ledaca decorated the windows of her home in Park Road, Henley, by posting a little information about her parents’ war records for passers-by to see.

Violet Mary Wellham served as a Wren at HMS Flowerdown, near Winchester. It was one of two wireless telegraphy centres.

She performed “Y” intercept work, which involved listening and picking up communications from German U boats and other German shipping. These messages were in Morse code.

She was also stationed at the underground wireless station at Scarborough, which is where the food was so deficient that many Wrens lost their sight after the war.

For the rest of her life she couldn’t bear radio static, having spent five years intently listening to constant radio traffic for Morse messages.

Leon Ledaca, known as Leigh, served as a flight sergeant and navigator on Lancaster bombers, undertaking numerous raids over Germany and surviving three tours of operation. Almost half of Lancaster aircrew never made it home.

He was shot down twice off the south of France while on reconnaissance missions from Corsica and suffered recurring nightmares about a young crew member, the gunner in the hold, who could be heard banging on the side as the plane sank. There was nothing anyone could do to help. Leon volunteered for the RAF at 16, lying about his age. Ms Ledaca said: “Our father took the airforce maths exam as a 16-year-old grammar schoolboy as the RAF were desperate for mathematicians after such heavy losses of aircrew at the Battle of Britain. He aced trigonometry, so they snapped him up as a navigator.”

Leon and his future wife Lesley met at teacher training college after the war. He went on to become headmaster of Woodlands Park Junior School in Haringey while she became deputy head of Wellesbourne secondary modern.

They were married in 1950 and they had three daughters.

Leon died in Spain in 1989 of MND and Violet died of breast cancer in 2002 while visiting her grandchildren in Australia.