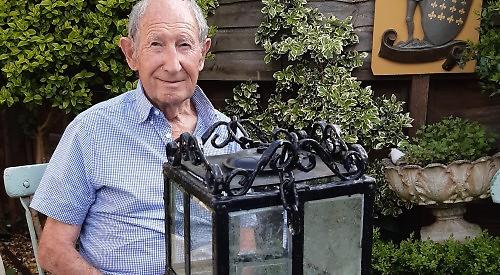 PETER SMART was born in 1929 at military hospital in South Tedworth.

His father was an army officer and his parents moved to Banbury, where Peter was educated at the local grammer school.

He also joined the army. He became a tank commander and served under General Belcham of the 7th Armoured Division and he met Field Marshal Montgomery.

While serving, he won many awards for track running. He was also a keen rugby player. He played for Henley and later watched his sons follow suit.

On leaving the army, he joined the Oxfordshire Police Constabulary, serving in Witney. In 1952 he came to Henley, where he met his wife Jean. They lived at the police house in Shiplake and brought up three children, Robert, David and Jane.

When he retired from the police force Peter moved into Henley and worked in London for the chairman of Hammasons for several years.

When he retired completely he was able to pursue his hobbies of gardening, woodwork and history. He loved travelling by caravan in the UK, Europe and Switzerland. He also joined Leander Club where he enjoyed meeting the men at the regular Lensday lunch club.

Peter helped his daughter create a film, Henley Regatta, Past and Present. He himself gave an account of how a USA crewman had pinched his helmet on finals day in 1973.

This film was sold at Way’s Bookshop in Henley and found its way to the USA where upon a past crew member saw the film and realised who the rower was. There followed a reunion in 2007 where Peter met the “thief” John Maslowski and they became firm friends

During the regatta another year Peter was on duty outside Phyllis Court Club on the night of a dance.

He was told that a young Irish crew member had gatecrashed the dance and could he get him out, which he did.

Not long after he was asked to get him out again and this continued for much of the night.

Finally, Peter’s patience had worn thin so he froggedmarched the young rower outside and finally let him go.

However, the Irishman kept going and, as it was dark, Peter could only hear his footsteps and then the sound of leaves rustling and the cracking of branches breaking followed by silence.

He was just beginning to panic, when there was a further noise of and this tall figure came out of the darkness, walking towards him, brushing himself down of the leaves and dirt. He stopped in front of Peter and said: “That was very well done, officer”.

The pair walked back to Phyllis Court by which time the party was coming to an end and people were leaving. Peter told the rower his shift was ending and that he was only hanging around to get a free pint.

“I’ll get you a beer, sir,” said the young man who went back inside and reappeared with two pints of beer. The men then drank their beer together in good companionship.

Peter loved living and working in Henley. He enjoyed all the people he met through the good times and sad times and made many good friends along the way.

He was known as a solid, experienced, dependable and a humane police officer. He was devoted to his family who have been described as the “backbone” of Shiplake.

Peter was taken to hospital on May 7 (not covid related) but in the current situation his family members could not go with him. Tragically, he passed away the following day.