It's your turn again, Mayor 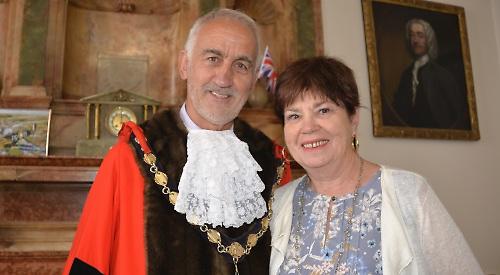 THE Mayor of Henley is to stay in the role for another year to provide experience during the uncertainty caused by the coronavirus pandemic.

Ken Arlett was re-elected by his fellow town councillors at the annual mayor-making ceremony, which was held virtually on Monday.

Deputy Mayor David Eggleton, a fellow member of Henley Residents Group, will also serve for another year in a move not seen in Henley for almost 20 years.

Councillor Arlett, who lives in Elizabeth Road, Henley, with his wife Dorothy, was nominated by Councillor Stefan Gawrysiak and seconded by Councillor Michelle Thomas, who also represent HRG. He was a founding member of the party and became its first mayor when HRG took control of the council from the Conservatives for the first time in 1991.

Cllr Arlett said the council’s first priority was to support all the shops in the town once they re-opened.

He and Cllr Gawrysiak and Councillor Kellie Hinton, Henley’s three representatives on South Oxfordshire District Council, were trying to persuade the authority to offer one hour’s free parking for shoppers at its three car parks in the town, King’s Road, Greys Road and Southfields.

Cllr Arlett said: “We will need to put our energy into the local bus service and to get more people to use it. It has been totally underused by residents. We will carry on working with Oxfordshire County Council and the district council on the decriminalisation of on-street parking so that Henley Town Council will act as an agent to enforce this in the future.

“Our local sports clubs and associations may well need to speak to the town council for support. We will also need to support the River & Rowing Museum.

“All that said, income from the town council’s car parking, buildings and investments will be down due to coronavirus. Tough decisions will need to be made to balance our books.

“We’re all very fortunate to live in Henley, the jewel in the crown of South Oxfordshire. We need to keep it that way.

“We have an excellent make-up of councillors and staff to get us through this torrid time and I’m sure we will all have the energy to do this.”

He said he hoped to hold a civic reception later in the year or next year once the threat posed by the virus had passed.

His chosen charities for his year of office will be the same as for the last year, Henley Music School, youth and community project Nomad and Mencap.

In his nomination, Cllr Gawrysiak said: “We need a mayor with experience and great leadership skills to navigate the coming months.

“Recently, because of covid-19, I have witnessed Ken at town, district and county level quietly behind the scenes engaging with the leaders and officers of the district and county councils to ensure that services to the residents of Henley continue. Therefore, this is absolutely the time where continuity is most needed.

“Ken has been a tremendous mayor for the past year. He has shown dedication, leadership, fairness and friendship to all residents, councillors and officers.

“He absolutely understands that councillors are elected to serve the people of Henley and with a generosity of spirit he gets things done, never taking ‘no’ for an answer and never accepting second best.

“At some time in the future the lockdown will ease but we will have an enormous piece of work to get Henley and the high street back on its feet. We need Ken at this time to guide us wisely through the next few months.”

Cllr Thomas said that re-electing Cllr Arlett was the most “practical solution”.

Conservative councillor Will Hamilton said he would not support a second term for Cllr Arlett.

He said: “I have never supported a mayor that wishes to stand for a second term. Surely there must be someone new in HRG that wants to take up this honour and give the council fresh energy, leadership and impetus.

“Henley is metaphorically on its knees. It is crying out for leadership from the town hall, working in partnership with local commerce and influencers. It needs an urgent road-map for business rejuvenation, one for the staff to follow.”

Cllr Eggleton, who lives in Gainsborough Road with his wife Nicola and three daughters, was nominated by Cllr Arlett, who paid tribute to his drive and enthusiasm.

The Mayor said: “Cllr Eggleton has excelled himself as Deputy Mayor along with Nicky. He has been excellent when deputising at functions for me and he has carried out his duties exceptionally well.”

Councillor Ian Reissmann, who seconded the nomination, said: “Dave’s approach is one of getting stuck in and we all know that he cares deeply about things being done right and he likes to tell us if they’re not.

“The important thing is that Dave does not just talk about things that aren’t right, he goes out and gets them sorted himself. He has a very hands-on approach.

“He’s a very popular and well-known figure in the town. He’s very visible, literally, in his high-vis vest.”

Conservative councillor Ian Clark had nominated Cllr Thomas for mayor and Cllr Hinton for deputy mayor but neither proposal had a seconder.

The last Hneley mayor to serve consecuitve terms was Tony Lane in 2000 and 2001.