Running together while apart 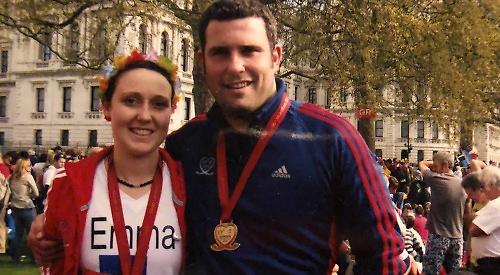 A GROUP of runners who came together after the sudden death of a Henley Rugby Club player are staying motivated during the coronavirus lockdown by sharing photos of their solo runs via WhatsApp.

The Sunday Running Club was set up in December 2018 by Emma Payne, from Sonning Common, after her older brother Adam took his own life.

Mr Payne, 36, from Hurley, rowed and played tennis and golf as well as rugby and often ran along the Thames towpath to keep fit.

His sister and about 40 friends and family members ran the Victoria Park Half Marathon in London in March 2019, raising thousands of pounds for mental health charities, including the Ways and Means Trust in Peppard, and then decided to keep up their morning sessions.

These came to a halt in March when the Government banned public gatherings to contain the spread of covid-19 so now they run individually or as households and take photos along the way.

The runners, who usually cover about five or six miles on footpaths around Henley and neighbouring villages, share these images on their WhatsApp group and leave inspirational messages encouraging others to do the same.

Miss Payne, 32, a ceramicist, who grew up in the area with Adam and her other brothers Ben and Matt, says it keeps them emotionally healthy amid the stress of isolation.

She said: “On the first Sunday after the lockdown was announced, people asked ‘who’s running today?’ on the group chat and it all took off from there.

“It’s lovely because it gives everyone the motivation to stick at it, even if they’re not running shoulder to shoulder.

“It’s harder to find the energy to go out alone and although there’s no obligation, the group can give people that little bit of encouragement to go for it.

“You’re still by yourself but others are running at the same time and it’s a chance to enjoy the glorious spring weather. There’s also that important element of keeping in contact with people outside your household.

“We’ve got members who can’t do the run on Sundays so they’ll do it on a different day and there’ll be messages popping up throughout the week.

“Some might be selfies while others will show their dogs or the beautiful countryside.”

Miss Payne said she was looking forward to the end of the lockdown whenever it happened.

“We’ll probably have a big lunch and a catch-up because that’s as important as the running,” she said. “Our group started as a way to do our ‘long’ runs together while training individually for the rest of the week.

“Some people were very fit and others weren’t but the purpose of the half marathon was to celebrate Adam’s birthday, which fell on that date, and to enjoy ourselves. We were mostly in it for the friendship and wanted to keep it going afterwards.

“I’m no athlete by any means, but every time I run I remember Adam. He was a natural sportsman, unlike me, and it’s nice to go out once a week and think about him.

“We’ve got a lot of support around the world, with friends doing the same in South Africa and Brazil. Before the lockdown our numbers would vary — sometimes there’d be 15 people and other times it might just be two or three but members can drop in and out depending on their other commitments.

“Most importantly, it’s definitely not a race. I’m probably the slowest in the group but others insist on waiting if you fall behind so that everyone finishes together.”

She says some people will struggle to cope with the virus restrictions so messaging apps can help to maintain a support
network.

“It’s hard at the moment because people are either alone or possibly stuck at home with only one other person,” said Miss Payne. “Keeping in touch remotely can maintain a sense of community which we wouldn’t otherwise have.

“I do a virtual gym class every other day with a friend by connecting on Facetime and playing a workout video on both our devices. It helps you feel connected and gives you something to talk about when many aspects of normal daily life are on hold.

“It’s also important to get out in the fresh air if you can. The social distancing rules are important but people are being very careful whenever I’m out and about.

“The other day a horse and rider shuffled sideways to give me more space, which was impressive.”

Miss Payne is training for this year’s Brighton Marathon, which was due to take place last month but has been postponed until September.

She signed up because this year will mark a decade since she and Adam ran the London Marathon together.

In November, she fractured a metatarsal after stubbing her toe at work and was worried she wouldn’t be able to take part but staff at Townlands Memorial Hospital in Henley encased her foot in a protective boot and she was able to resume training early in the new year.

Miss Payne said: “I was pleased that I hadn’t lost too much fitness. While I was still recovering running the marathon seemed like a ridiculous idea but soon afterwards I had a surge of confidence and I should be fine now I’ve got more time to prepare.

“I’ve reduced my weekly mileage for now but I’m going to build it back up soon. I don’t think I’m going to be an amazing marathon runner and I’m not feeling any pressure to beat my last time but I should be able to finish it. I’m simply going to enjoy the experience.

For me, running is a chance to shut off my brain for a while. It’s a healthy hobby for your mind as well as your body, whether you use it as time to reflect on life or an opportunity to stop thinking and enjoy some music.”

Miss Payne will be raising money for Mind, the mental health charity, and also hopes her efforts will get people talking about the issue.

She said: “I’d like people to take five minutes to check in on others around them, including people they might not normally do that with.

“When Adam died, it made me realise how many people die by suicide and how his age bracket is a high-risk group.

“I’m a lot more conscious of that when I’m talking to people and I want everyone to have that inclination — to ask ‘how are you?’ and really mean it and to understand what isn’t being said.

“This is a time when people are particularly vulnerable. There’s no getting around the fact that the coronavirus outbreak is a horrible thing and there are no easy answers for what some people are going through.

“The situation will improve but it’s always all right to not be feeling okay.”