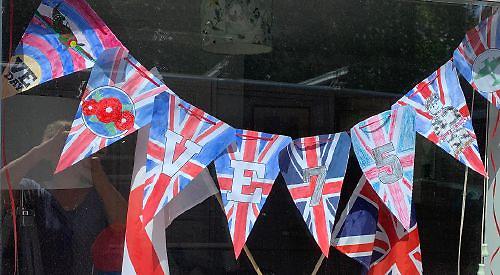 THE winners of a window display competition to mark the 75th anniversary of VE Day have been announced.

The Henley and Peppard branch of the Royal British Legion asked residents to turn their windows red, white and blue in a show of unity, remembrance, respect, commemoration and celebration and then send in a picture.

About 20 entries were received, almost half of them from members of the Henley Army Cadets.

First place was awarded to Caroline Barefield, of Elizabeth Road, Henley, who decorated the window of her home with a Union flag and the number “75”, which was coloured in.

Second place went to Kim Deeley and Trevor Bailey, of Mount View, Henley, who hung a model of a B17 bomber which had been decorated with a Union flag design in their window with “VE Day 75” below.

Natasha, a lance corporal with the cadets, wrote a brief history of VE Day decorated with poppies and little pictures of soldiers. Georgina put up Union flag bunting featuring poppies, Spitfires and soldiers to spell out “VE 75”.

Mrs Barefield’s prize was afternoon tea for two delivered and presented by Time for Tea Vintage of Henley.

Legion branch chairman John Green thanked everyone who entered and for helping to turn the area red, white and blue for the occasion.

He said: “What was so good was the amount of creativity. It wasn’t just one member of the family  doing it, it was a combined effort and there was some terrific originality.

“We thought there was not going to be anything to mark this important anniversary  but a lot of Henley and district did their own little outdoor events while still obeying government guidelines.”

Anne Evans, who was one of the judges, said: “The only way we could show any recognition for this was to catch the eyes of passers-by. It was also an opportunity for parents to explain to their children what it was all about.”