Hanging baskets go up to cheer us 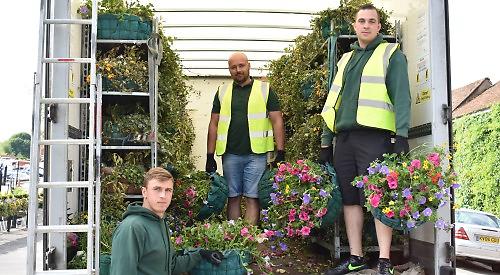 A total of 195 have been ordered by businesses and residents to brighten up the town centre streets.

As usual, they are being installed by Windowflowers, the town council’s contractor, which will water and maintain them over the summer. The service costs £67.50 per basket.

Miles Watson-Smyth, managing director of the Slough firm, said: “Despite the economic climate, people have put their hand in their pockets and contributed to brightening up Henley. I think the number of baskets sold is as good as, if not better, than in previous years, which is outstanding.”

He said the firm’s staff were being careful to follow the government guidelines when installing the baskets on the outside of buildings.

“It is most important that we stay safe and do not spread the virus and Windowflowers has modified its safe working practices to ensure this,” said Mr Watson-Smyth.

“The support shown by Henley Town Council has been so welcome when there is so much uncertainty around.”

Among the latest buyers is Villars Hayward LLP in Boston Road.

Office manager Marion Hayes said: “We have been ordering them for five years. We used to do our own but it was a lot of work watering them ourselves. This makes life a lot easier.

“The hanging baskets have become a bit of a landmark for us. If clients are trying to find the office, we tell them we are the one with two hanging baskets outside. We often get compliments.

“It is really worthwhile doing and I think we all need cheering up at the moment.”

Maude Humphris, who lives in King’s Road, has ordered a basket for the first time.

She said: “When I rented in Queen Street a neighbour had a basket and it was fabulous.

“I am really excited to get my own. I have managed to encourage two of my neighbours to get them as well.

“I have been beautifying my front garden and the finishing touch will be the basket.

“I just want it to look really pretty and I don’t have to worry about all of the maintenance because they do it all for you.”

David Guillebaud’s basket is already up at his home in Friday Street.

He said: “I think it is a terrific idea. We moved in last October and my neighbours suggested we brighten up our street, so that is what we have done. It makes the whole living environment much more pleasant and they do all the installing and watering for you.”