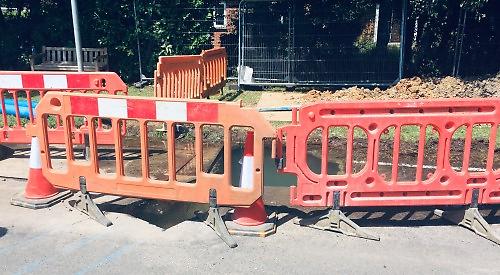 HOMES in Binfield Heath were left without running water for most of a day after a contractor hit a water main.

Workers from civil engineering and groundworks firm Redlime were creating a new sewer connection to a house being built in Dunsden Way when a digger struck the pipe at about 8am on Tuesday.

Water filled a large hole in the road near the junction with Kings Common Close.

Paul Rollason, chairman of the parish council, said most of the village was without water.

Free bottles of water were available to villagers at Binfield Heath Post Office and Stores and Thames Water used a tanker to keep properties supplied.

The owner of the house spent the  afternoon driving around the village with her children handing out water bottles to every householder she could reach. Dunsden Way was closed to enable repair work to take place. Some houses had their supply restored by 3pm but others had to wait until 10.30pm.

Thames Water said its staff worked non-stop to fix the 6in pipe. “We know this has happened at an especially difficult time and understand the concerns our customers may have,” said a spokesman. “Engineers stayed on site until after midnight to ensure customers were back in supply.”

A spokesman for Redlime, which is based in Horton-cum-Studley, near Oxford, said: “He just caught it [the pipe] as far as I’m aware. We took every precaution we could.

“The first thing we did was contact Thames Water and reported it to them and they came out fairly quickly. Obviously, we feel for the village completely.”