Drama as driver collides with two parked cars and bus 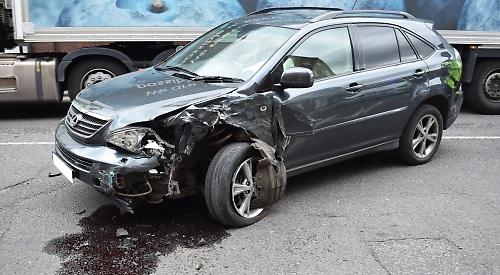 THE driver of a car collided with two parked cars and a bus in Henley.

The incident happened in Bell Street at about 3.55pm on Monday.

The man was driving a Lexus RX400h towards New Street when he collided with a Range Rover Sport and Ford Focus, which were parked near Rupert House School, then struck the Arriva bus which had been in front of him.

No one was injured in the collision but all four vehicles were damaged.

The Lexus driver, who was middle-aged, looked shocked and was spoken to by police at the scene.

His car was left in the middle of the road and could not be moved.  The front passenger side of the vehicle was badly damaged, exposing the engine, and there was oil over the road.

The Range Rover Sport had its rear bumper ripped off, exposing the exhaust and electric cable, while the Ford had damage to its rear bumper and a dent on a rear passenger door. Debris was left strewn across the road. The bus, the 850 service to Reading, suffered a dent in its side.

After stopping for about 15 minutes, the driver continued his journey.

Police directed traffic until the Lexus was recovered after almost half an hour. They said that no arrests were made.