‘Covid recovery plan should be green, not just back to normal’ 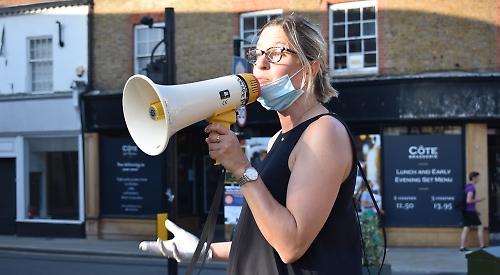 MORE than 50 climate change campaigners held a demonstration in Henley.

Extinction Rebellion Henley was pressing Henley MP John Howell and the Government for a green covid-19 recovery plan as part of a nationwide day of action.

The group staged a peaceful protest in Falaise Square on Thursday evening and all the participants wore masks and kept 2m apart.

Many carried placards, some of which read “Build back better”, “There is no planet B” and “Green recovery from covid-19”.

Drivers sounded their car horns as they passed to show support.

There were speeches by Kate Oldridge, co-ordinator of Extinction Rebellion Henley, as well as members Jules Lacey, Ed Atkinson and Dominic Hall.

Mrs Oldridge, an executive coach, told the crowd: “I’m very passionate about trying to make changes for the better in relation to the catastrophe we have on our hands.

“We have got to send the message loud and clear to government that it has got to be a clean and just recovery package. The recovery can’t just be ‘business as usual’.”

She encouraged people to write to Mr Howell asking for his support.

Mrs Oldridge added: “The Government advisory committee on climate change has delivered its progress report. They have said that the Government is failing in its commitment to reach net zero emissions by 2050. This is dangerously late. We’re talking about the very survival of our species.

Afterwards, Mrs Oldridge said it was not a political issue and that Extinction Rebellion was “beyond politics”.

“This is an emergency that affects all of us, regardless of our political persuasion,” she said. “In fact, we are asking the Government to implement the recommendations of its very own advisers.

“We are constituents of John Howell, asking him as our representative in Parliament to take action on an emergency which is predicted to cause flooding, overheating and water shortages in the UK, quite apart from the death, suffering and displacement of people on a massive scale all around the world.”

Prof Fortey said: “The extinctions in the past have been, shall we say, natural phenomenon. What makes this one different? None of the other mass extinctions have been caused by a species on earth. This mass extinction is our responsibility.

“We have released (carbon), we have burned it, we have put it back into the atmosphere. That is without precedent in the previous mass extinctions. Global warming, of course, is partly a product of unsustainable exploitation of resources. I think what we can really be certain about is global warming is happening. Unless we do something serious, it’s going to get worse.

“It’s up to all of us to exercise what influence we can on our politicians to make sure they take it as seriously as we do.”

Mrs Lacey told the rally that the survival of the human species was at stake. “The climate and the ecological impacts is the biggest threat all living things have ever faced,” she said. “Greenhouse gases dropped during the pandemic but are now on the rise again.

“We’re still waiting for our government to catch up and declare a climate and ecological emergency and act on it. Their target to be carbon neutral by 2050 is dangerously inadequate.” Global warming must stay below 1.5C for there to be any chance of survival, she said.

Extinction Rebellion has also called for a government-backed citizens’ assembly to find solutions.

Caroline Hadley, from Whitchurch Hill, who attended the protest, said: “We can see now what happens if we don’t listen to the science so perhaps we should think a bit more about that.”

Natasha Kenny, also from Whitchurch Hill, said: “Because of what’s happened with covid, it has kind of forced people to put the brakes on the way things were going and it would be a shame to take a step backwards.”

Angelina Jones, from Henley, said: “It’s time the Government put the environment on its agenda.”