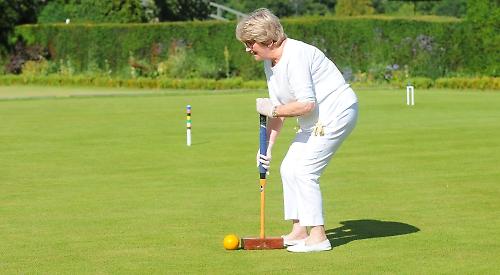 PHYLLIS Court Club in Henley have agreed on Wednesday, August 5 as the date for their National Inter-Club Croquet Championship semi-final against holders Nottingham.

Following their convincing 6-1 win against Somerset side Camerton & Peasedown a fortnight ago in the quarter-finals, Phyllis Court “A” will play away at Nottingham against the club that has beaten them in both the 2018 and 2019 national finals which were played here in Henley.

Phyllis Court will be at full strength with the return of Ireland international Charlie von Schmieder to the team, as they look for a third-time-lucky victory at the venue that hosted last season’s under 21 World Championship.

Nottingham will field a star-studded side that will likely include at least two international players James Death and Ian Burridge.

On home turf, Phyllis Court’s season-long competition threw up the best match of the season so far, in when Helena Fensome met Robin Coates in the Club Championship open event.

The two players matched very closely at handicap grade two and are only separated in the national ranking by a handful of places.

Fensome was on fire to start with and raced into a commanding lead which she held throughout their first game of three, with her high-risk long-range shooting securing a 7-4 win.

Unfazed, Coates maintained his more conservative approach of waiting for his opponent’s errors in the second game and his steady play was rewarded with a 7-2 win and all the momentum going into the decider.

Some excellent clearances and mature tactical positioning from both players kept the scores within a point and level as the match reached its zenith with hoops to go.

Nerves then came into play and first Fensome and then Coates missed easy scoring shots at hoop 10 where Coates had a chance to take a decisive lead but clipped Fensome’s ball with a costly failed jump.

Fensome took the lead for the first time at hoop 11 and Coates made it 6-6 after a prolonged battle at the penultimate hoop, taking a wonderful match to the final hoop of the final game.

Fensome had the first shot advantage and positioned well enough from the far penalty area and was even more in control when Coates fell short with his first ball.

A pressured centre ball clearance by Coates kept him alive a few strokes later but Fensome wrapped it up soon after with a 6ft winning score ending a very entertaining encounter 7-4, 2-7 and 7-6.

The highlights of the past week in the other Phyllis Court competitions, were wins for two of last year’s beginners Allan Henderson and Phil Johnson over more experienced opponents Steve Morton and Di Pascoe respectively in the 7+ event, and for Morton himself and Mary Gaynor against Helena and Mike Fensome in the handicap event.