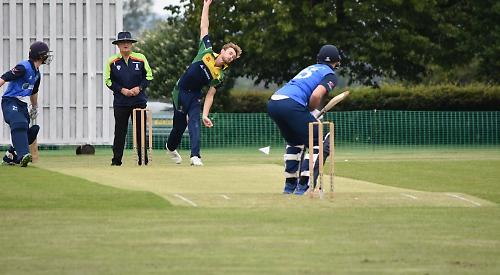 HENLEY returned to competitive cricket with a five-wicket victory over Aston Rowant in a thrilling encounter which the visitors edged with just seven balls to spare.

Winning the toss on what was then a chilly and breezy day that improved, Henley elected to bowl.

Fielding restrictions on a big ground allied to some wayward bowling got the home side off to a decent start before Harry Jordan, replacing Andy Rishton, bowled Rowant opener Reid with his second ball, soon followed by Coles to make it 63-2 off 10 overs.

Rowant sailed past 100 in the 16th over before the spin of Ali Raja and Euan Woods combined to remove first Condon, then the dangerous Smith just as he was getting going and, later, Fitzjohn to tighten things up such that by the 30th over, Rowant had added just 50 runs.

But Rowant were far from done and Whatling and Pritchard, the latter formerly of Chesham, Tring Park and Buckingham Town and only back in this country from Australia as a result of the pandemic, blazed away to great effect, striking some mighty boundaries and driving their side well north of 200.

Whatling and Bethell would fall to a returning Nugent but, by the end of Rowant’s 40 overs, Henley needed 234 to win, the biggest target of the day across all 10 league games.

Skipper Mike Roberts was positive from the off and although Mikey Williams departed in the 10th over, having seen very little of the strike, Roberts was joined by Middlesex’s Jack Davies.

Both players now combined in a masterclass performance for a 128-run partnership, finally broken by the expensive Mannering in the 28th over when Roberts (80 of 87 balls, nine fours and one six) departed, followed by Davies (69 off 64 balls, with nine fours) in the next. By now, Henley needed 69 to win off 11 overs and there was still plenty of work to be done.

Energised by the departure of their principal tormenters, Rowant applied the pressure to remove Woods cheaply, followed by the dangerous Richard Morris who was beginning to find the range. But Henley bat deep and Rishton and Euan Brock gave an object lesson in how to close out a game, running hard, turning ones into twos, clever placement of the ball and a couple of eye catching boundaries from Rishton who also survived what would have been a spectacular catch at wide long on. Needling 29 off the last four overs, the thirty-seventh produced 14 of them, the next 7 and the penultimate 9 to take Henley over the line and leave a large crowd variously happy and disappointed at the outcome, but all enthused by an exciting game and the quality of the cricket on offer.

After the game Henley skipper Roberts has this to say: “It’s always a tight game against Rowant and this was no exception. On the whole it was a pretty impressive performance. Our skills were a little undercooked in the field, but the effort and attitude was right where it needed to be. To win a tight run-chase early in the season gives us plenty of confidence going forward, knowing that our strongest suit is likely defending.”